JournalStone Publishing recently asked some of their authors to discuss their newest books and what lead to them writing about their subject matter.  Kristina’s article gives you a bit of insight into her creative process:

The Thinking Man’s Blood and Guts

Someone once said, “Science Fiction is the genre of the improbable, and Fantasy is the genre of the impossible.” I would like to extend that and suggest that Horror is the genre that scares the skittles out of you. Humans are prone to classification; we nit-pick until we’re buried in subcategories like “Slasher Suspense,” “Dark Urban Fantasy,” or god forbid, “Paranormal Romance.” But the key ingredient of an effective Horror story, is that what we thought we knew, turned out to be completely ass-backwards, and may actually be intent upon our destruction. It’s ironic, but Horror is by definition the one genre that should always attempt to defy our expectations.

Now don’t get me wrong, when you’re alone on a stormy night, in the home of a retired big game hunter, cat-sitting his hairless, arthritic siamese, there’s nothing better than the cookie-cutter creeping menace or Slow Mover Undead flick. They have their place, but really there’s very little to them. They scare us, but we know why they scare us, and so we can laugh every time we jump. It becomes a formulaic joke, so much so that movies like Scream induce nods in all who see them.

I’ve always admired stories that unsettle me from beginning to end, and hold me there, unable to reconcile. For example, you may call it Science Fiction or whatever, but that movie The Day After Tomorrow, that was some horrifying film-making, and I’m not just talking about the screenplay. I’m talking about the premise of catastrophe on a global scale, that we began, and cannot outrun. The Stepford Wives may rally feminists, but it’s also intrinsically horrifying, because reality is being rewritten and people are being methodically deprived of their humanity. In many ways, this is even more disturbing than Invasion of the Body Snatchers, because it is being perpetrated by people we know and trust, and not by some nameless species of alien hell-bent on our resources, because they never learned how to recycle while they were inventing faster-than-light-speed travel.

One of the most common remarks I receive on my novel Craving, is that it is a new and interesting spin on your standard monster, and that while it works in an odd way, blood-drinking immortals and Buddhism don’t usually mix. I love this comment, but really, it’s not so strange to me. Perfect peace, or the promise thereof, is absolutely horrifying. It’s all well and good that desire is the cause of suffering, but guess what, having no desires bothers me way more. Perhaps you see now why my inner skeptic felt there was something disconcerting to Nirvana, but it might interest you to know that Buddha’s inner circle was called the Sangha. The trouble is that this sanskrit word is the great-grand-cousin of our word for blood. What if meditating on the oneness of all things was actually a bad idea? What if the brain can’t really handle paradoxes, and zen koans took us one step closer to a precipice?

That was the beginning, and before I knew it, I was busy offending Buddhists everywhere, though, I must say, if they’re offended, they may have missed the point…

The entire Apocalyptic Series has become a web of interweaving conspiracies, misunderstandings rooted in biological flaws, the best intentions of egotists going awry. I’ve read so much comparative religion, evolutive linguistics, and folklorist manifestoes, I feel like I might have become some new breed of hyper-anthropologist, specializing in the migration patterns of monster stories across the globe. That, or one of the weirdest party guests you’ll ever stuff with cocktail weenies.

The second book, The One We Feed, coming out on August 16, traces the myth of the modern werewolf as far back as you can go, which it turns out, is pretty far. You thought the dog was our best friend, but I’ve noticed no one really talks about the dog-men; they’re usually just an appendage to a terrible vampire riff. That’s kind of the point, really. We’ve forgotten what disgusted and bothered us about classics like An American Werewolf in London. It isn’t the sloughing skin, or the sprouting of talons, because let’s face it, most of us wouldn’t mind hulking out once in a while. Worse than enduring a torturous metamorphosis is waking up the next day and realizing that you are a prisoner sharing a biological cell with something monstrous. It’s perpetual enslavement that truly terrifies – the inescapability of madness, the betrayal of the flesh, the confinement of nature in spite of nurture.

My main character, Lilith Pierce, may have figured out the whole “enlightenment” trick, scored some banging super powers, and laid a little waste, but she can never see her sister Eva again. The horror of her situation is in the loss and the constant loop of wondering if there was anything she could have done, or if indeed, she is to blame. In many ways that is the one unspeakable horror at the very core of all thrills and chills: the unrelenting press of time and mortality. It is also, incidentally, one of the reasons I married a geneticist.

Horror is not just about the adrenalin rush. It’s about exorcizing our demons, and by that I mean our psychological baggage, not a pea-soup spewing Legion. There’s really no such thing as genre here. We’re all just walking off a bunch of phobias on a nice big track circling a cemetery, and though Iusually despise zombies and all they stagger for, I’m pleased to be a part of it. 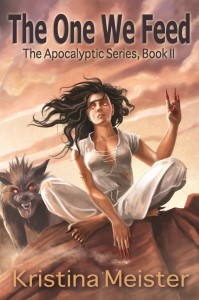