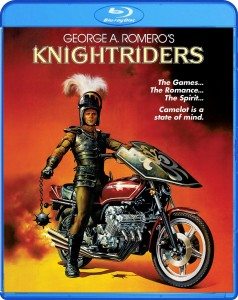 OK, so this is not a horror movie, but it has the pedigree of one. It is written and directed by George Romero. It stars and has special makeup effects (what little there are) done by Tom Savini. It’s got supporting roles played by Patricia (Babylon 5 and Night of the Living Dead remake) Tallman and Ken (Dawn of the Dead and all around badass) Foree. And the new Blu-ray is from Schout! Factory, the parent company of the amazing Scream Factory. So there, It’s worthy of being reviewed by me, on here, and seen by you. Got any more questions?

Knightriders is an odd but highly enjoyable little movie about a group renaissance fair performers. Yes, really. This family-like band specialize in putting on armor, riding dirt bikes, doing stunts and tricks, and even jousting and having combat on those motorbikes. Yes! Really! And all this is a ton of fun as only flicks from the 80s seem to be able to pull off well.

The band of performing brothers is led by a “king” named Billy, played by Ed Harris, who has romantic ideas of honor and chivalry. His main rival within the troupe of travelers is Morgan the black knight, played to perfection by actor/stuntman/special makeup effects guru, Tom Savini. Morgan is not a bad guy per say, but he loves the fame and woman that comes along with being a renaissance fair performer a little too much. Yes, you read that right, he gets fame and women for dirt bike jousting. I honesty could not make that up if I tried. So naturally this creates a riff between King Billy, who wants to keep their show as it has always been, and only does it out of a pure love for the lifestyle of freedom it represents, and Morgan who wants to sell out for quick cash and hot chicks. Both charismatic leaders have their followers, so soon there is a near civil war splitting this dirt bike Camelot apart.

As if that was not enough drama, the knightriders must also deal with threats from outside their close-nit circle. There is the ever present financial troubles that plague small carnivals like this. There is also the redneck cops that just seem to live to torment people traveling through their little patch of authority. So with all this against them, can these dirt bike riding knights in plastic (at least looking) armor come together and prevail? Or is this fuel injected fairytale doomed to a bad ending?

Now not everything works with this move. First off, it’s pretty damn long, as in well over two hours. At least a half hour could have been cut out from this without much of anything important being lost. Second, some of the stunts and medieval-like combat are impressive, but there’s not enough of it, or not enough variety in it, to sustain a 146 minute long movie. It all starts getting a little tedious. Lastly, the entire movie is about dirt bike riding performers play acting, for the most part, and some people will no doubt have a problem with that. That all being said, the movie is ably directed by Romero and the actors all do good to great work, with Savini really shining here as the selfish, conceited Morgan. Also, Horrorheads should keep an eye out for cameos by Stephen King and his wife, Tabitha, as a couple of yokels. Stunt casting like that always makes me smile at least a little.

The special features on this new Blu-ray from Shout! Factory include a cast and crew commentary with George Romero, Tom Savini, and a few others. It is a fun, funny, and informative commentary and George and Tom are easily the stars of the show here. There are also a trio of interviews to be found on this disc. The first is with Ed Harris that runs 8 minutes. The second is with director Romero that is over 17 minutes long. The third one is with Tom Savini that lasts 10 minutes. There is an 8 minute long behind the scenes bit on the stunts from the film that’s mostly a collection of home movies shot while the movie was being made. A trailer and some TV spots bring the extras to a close.

Knightriders isn’t for everyone, but I do so enjoy this weird, goofy, and thoroughly original movie. If you’re a fan of Romero, Savini, dirt bike stunts, jousting, or renaissance fairs, then give this movie a watch, I’ll bet you dig it. Or if you’re just looking for something different, this sure is something different. So for people like that, I can easily recommend Knightriders.