Kickstarter Launched to Publish Death’s Daughter and the Basket of Kittens. 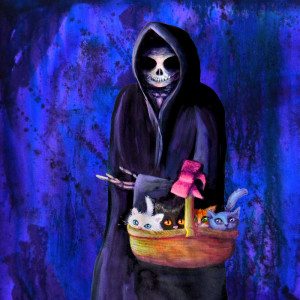 Kickstarter launched to publish Death’s Daughter and the Basket of Kittens.

Just what exactly is a death-absorbing kitten? Why would a little girl want a basket full? And what does it feel like to be the Grim Reaper’s daughter? These questions will be answered in Martha Hull’s cute, gothic new book Death’s Daughter and the Basket of Kittens if it meets its Kickstarter funding goal by November 17. Just in time for Halloween, artist, author, and independent publisher Martha Hull is delighted to announce the launch of a Kickstarter campaign to publish Death’s Daughter and the Basket of Kittens. It’s an adorable, subversive coming of age tale (and apocalyptic bloodbath) starring the Grim Reaper’s daughter, told in a 64-page color picture book. Main characters are the Grim Reaper, his daughter Belladonna as a small child, and her four death-absorbing kittens.

Inspired by macabre artists such as Edward Gorey and Tim Burton but with her own voice and visual style, Hull juxtaposes the vehicle of the cute picture book with macabre subjects in a humorous way. She uses spare and poetic language to understate what is happening in the pictures, adding to the humor of the story. The big-eyed kittens and people combine delightfully and disturbingly with the affectionate portrayal of Death Incarnate and the apocalypse, making the book all the more pernicious.

Death’s Daughter and the Basket of Kittens will be Hull’s second book. Hull self-published her first book, Untimely Death Alphabet, in September 2012. It’s a book of cautionary tales told in pictures in the shapes of the alphabet.

In line with Kickstarter.com guidelines, artists have a set number of days to raise all the funds, or the project receives nothing. Hull’s book has a 30-day fundraising window, from start to finish. If the allotted budget ($13,000 US) isn’t raised before November 17, all pledges are canceled and the book will not be published.

Check out this cute, funny, macabre book to get yourself in the mood for Halloween!

About Martha Hull: Martha Hull is an artist and author specializing in cute, funny, deadly picture books. She lives in Portland, Oregon, having left her childhood home of Vermont when she developed a severe snow allergy. She celebrates Halloween year-round.