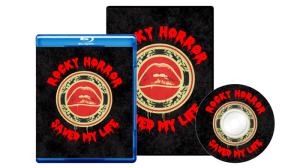 The Rocky Horror Picture Show always takes me back to my senior year in high school.  The midnight Saturday show with my friends was often the highlight of the week.  Now there is a documentary being made that focuses on the fans who have made this film so relevant for so long.  Why don’t you consider visiting their Kickstarter page and making a donation.

A documentary on the fans, collectors, and live performers of “The Rocky Horror Picture Show”, as the film nears its 40th Anniversary.

“The Rocky Horror Picture Show” is the longest-running theatrical release in film history.  Since its debut in 1975, it has become the very definition of “cult movie.”  However, if you’ve ever been to a live performance of Rocky Horror, you know that the film is only one part of a very unique midnight movie experience.  “Rocky Horror Saved My Life” is not a documentary about the people who made this legendary movie, though.  It’s about the fans who have devoted their lives to preserving it.

For almost 40 years, people from all walks of life have “given themselves over to absolute pleasure” by performing live on the stages, aisles, and seats of cinemas showing “The Rocky Horror Picture Show.”  From the first time Louis Farese yelled ‘Buy an umbrella, you cheap bitch!’ in the audience at the Waverly in NYC, to the innovations that have brought Rocky Horror “audience participation” into the 21st Century, we’ll examine the origins and traditions of this truly unique cinematic phenomenon from the perspective of the people who sacrificed so much to keep it alive.  Throughout 2014, our crew will travel to cities all over the US, and possibly all over the world, to document the history of Rocky Horror’s avid collectors, live performers, and devoted fans.

Given our experience, and the resources at our disposal, we feel quite confident that we can make one hell of a documentary, even on a fairly tight budget. Expenses for camera equipment, travel, and post-production can add up pretty fast though, so we can’t do this all on our own.