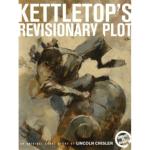 Kettletop’s Revisionary Plot is Lincoln Crisler’s contribution to IDW Publishing’s Zombies vs Robots new prose collection. It’s the last of eight stories released, one per week, for $.99 in a variety of digital formats from damn near every e-book retailer in the realm – Amazon and iTunes, amongst others.

It’s described in the media as follows: A desperate scientist goes back in time in order to prevent the original release of the Z Virus and save his wife. (This is sure to work.)

“I had a lot of fun writing it,” says Crisler, “and I think many of you will like it, even if you’re unfamiliar with the ZvR franchise. It also serves as a preview to the hardcover anthology, This Means War! which contains this piece and 34 or so other ZvR short stories and will be released in April. If you enjoy my story and can’t wait for more, there are seven other previously released shorts by Brea Grant, Steve Rasnic Tem and others available through the same channels.”

Catch it on the Kindle here: Kettletop’s Revisionary Plot