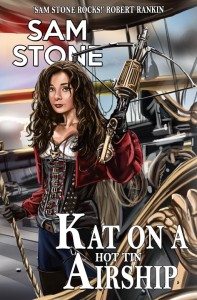 Kat on a Hot Tin Airship

Sam Stone is the multiple award-winning author of a half dozen novels and countless more novellas, scripts and works of short fiction. Many of her works have been produced as audiobooks, and the rights to her first novel, Killing Kiss, have been procured for distribution in Europe. Kat on a Hot Tin Airship is the follow-up to her hugely popular novella, Zombies at Tiffany’s.

Set three years after the events of Zombies at Tiffany’s, Kat on a Hot Tin Airship continues the adventures of Kat Lightfoot, demon-hunter extraordinaire, and her capable colleagues, Pepper and Crewe. This time Kat and her family are caught up in the Pollitt family’s dark mysteries when they visit her soon-to-be betrothed brother, Henry, on the Pollitt’s southern plantation. What seems to be a simple family feud quickly escalates into a terrifying fight for survival as a vengeful spirit unleashes unspeakable evils upon the innocents of the family, and unspoken secrets threaten to destroy a generation of good folk.

Kat on a Hot Tin Airship sets off at a blistering pace with an exceptional opening sequence that not only introduces the setting and technology of the time, but allows new readers to discover just who Kat Lightfoot is and what she does best. Stone’s love of invention and gadgetry is obvious, and she describes the workings of Kat’s weapons with economy and enthusiasm. In these opening chapters the reader is made aware of the constant dangers lurking in the darkness, and the methods with which they are dispatched. It is all hugely enjoyable.

As the story moves to the Pollitt Plantation however, the tempo slows and we are thrust from a ripping yarn into a Southern ghost story. Admittedly the shift caught me a little off-guard but Stone’s writing skills, including truly impressive characterizations and an intricate plot that unravels at a satisfactory pace, drew me into a story dripping in gothic atmosphere and woven through with demons and voodoo.

If I had one minor complaint, it was that the titular airship wasn’t featured enough, but this may be further evidence of Stone’s ability to dangle a tantalizing idea before the reader, laying the groundwork for future escapades on the tin-lined craft.

The characters, both major and minor, are given room to breathe and develop and, most importantly, Kat Lightfoot is prevented from being a one-dimensional demon-hunter by a well-written arc that reveals her insecurities and suppressed desires.

All in all this is a terrific read from an author at the top of her game, and Kat on a Hot Tin Airship is an excellent chapter in what I hope is an ongoing saga – highly recommended.