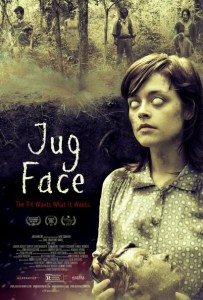 Deep in the backwoods of nowhere lives a small community of people who are purposely cut off from modern civilization. They seem to be luddites and live in accordance with their own rules. They make money by selling moonshine to the “townies” and they arrange who their sons and daughters are to be married to.

Their life is primitive and never changing. Their true religion, however, seems to be their dedication and subservience to The Pit. It is a hole in the ground that seems to be 8 feet deep or thereabout. There is a power that dwells within the pit and can heal people when they are sick but, to appease the power in the pit, members of the community must sacrifice one of their own whenever one is chosen.

The sacrifice is chosen by the pit using a mentally disabled man, played by Sean Bridgers from Lucky McKee’s brilliant The Woman. When the pit has chosen someone, Bridgers goes into a trance and carves the face of the next sacrifice onto a jug.

Trouble begins when Ada, played by Lauren Ashley Carter, also of The Woman, finds her face on the jug and realizes she is the next sacrifice. Having just become pregnant by her brother, she does not want to be impure and anger the pit so she hides her jug in the woods. Doing this, of course, angers the pit anyway and people begin to die as Ada’s secret begins to come out.

It is a complex idea but the film handles the revelations and backstory of the pit with ease. We never learn why the pit does what it does or when it all began. We are given the facts and we are to accept it from there. It is a solid premise and I enjoyed the set up.

Ada’s parents are played with gusto by indie horror mainstay Larry Fessenden and Sean Young who brings the crazy that she does so well. They are both well cast and are given good lines and interesting moments without morphing into cliché.

Sean Bridgers does good work as the pits conduit. He is mentally handicapped but not enough to not see danger and knows what is happening is becoming very wrong. How he sets out to help Ada is very interesting.

Laura Ashley Carter is fine as Ada. She plays her as an innocent who loves her brother so much that she dares to have sex with him to be closer, only to find out later that she has been promised to a son of another family. As her brother becomes sick and people begin to die, Ada realizes that she has, in fact, angered the pit by refusing to be sacrificed. Carter is good at projecting her emotions as they range from hidden fear and sadness to desperation and acceptance.

First time director Kinkle does a good job with his premise and sets the right tone from the beginning. We immediately get a feel for the backwoods life these people lead. In the opening half, we could be watching a film directed by Walter Hill in his heyday.

Kinkle keeps the tone going throughout the film and in the kill scenes he uses POV without calling attention to himself. The violence is fast and brutal and people die screaming, but he is never exploitative nor does he go for cheap thrills.

The downside to the film would have to be the fact that it runs out of steam in the last 30 minutes and the ending is a dead end. With the way the director kept up his horror momentum throughout the first half, I feel the ending should have been something more interesting. I have no problem with ambiguity in films but, in this one, after all we’ve been through, it just stops. We are left with wanting a bit more.

Jug Face is an accomplished and original horror film given its small budget. Kinkle also wrote the script and has come up with a very good idea that keeps our interest almost all the way through. Though not perfect and a bit too short, it is quite effective and entertaining. I look forward to the director’s next project.