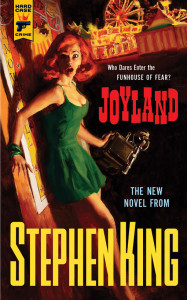 This is a rather late review of a novel that I consider to be one of Stephen King’s finest books to date.  In many ways this story is reminiscent of his previous ones like The Shawshank Redemption, The Green Mile and 11/22/63.  These stories are of a different time period that seemed more innocent and certainly offered more hope for the future; yet, those periods of nostalgia also held a darkness that was quick to snatch you up, if you weren’t looking.

I guess you say another reason I enjoyed Joyland so much is that I’m from the coast of North Carolina (the Beaufort and Morehead City area) and that the story takes place about a hundred miles south of there in the early seventies.  This was a time when you could easily walk along the beaches and enjoy the cool breezes off the Atlantic Ocean and the sound of seagulls hovering above the rolling waves and the ocean’s salty scent in the air.  You didn’t have to be nervous, especially at night, of someone creeping up behind you with a knife in their hand.  Though it occasionally happened during that era, it’s not like today with the daily horrors increasing ten-fold by the year.

Anyway, Joyland is the story of Devin Jones, a college student in New Hampshire, who decides to take a summer job during 1973 at a carnival near the South Carolina and North Carolina border.  His girlfriend has more-or-less broken up with him, but he refuses to face the hard, cold facts.  Subconsciously, he hopes they’ll get back together once the fall semester kicks back in.  By then, things will be different for her and for him.

The carnival where Devin gets a job is called Joyland, and a young lady was murdered there in the Horror Fun House by a serial killer a few years before.  That gritting piece of horror doesn’t bother Devin as he begins to learn the ropes and grind of the carny life.  He soon captures the attention of the carnival’s owner because of his hard work and diligence.  It also doesn’t hurt that he saves the lives of two people during the summer months.

In time, however, Devin’s friends at the carnival, as well as the new ones he soon meets, will inform him about the ghost of the dead girl that still lingers inside the fun house, while unknowingly leading him into a final confrontation with the serial killer, who is watching to see if anyone becomes even remotely suspicious of his true identity.

Devin’s whole life will change the summer of 1973 as he becomes more mature, falling in love for a second time and finally having to face an incarnate specter of evil to protect the lives of others.  This will be the summer he never forgets.

The writing in Joyland seems to be so effortless and the development of the characters so clear and distinct that it’s almost as if the book comes alive in your hands.  I know I found myself totally immersed within that remarkable summer and the world of the carnival and its many types of workers.  This is really what the process of writing is all about…taking the reader on that very special journey with the written word so he or she can discover new things about themselves that they’ll never forget.  This book not only took me out of the drudgery of everyday life, but raised the bar for my own goals as a writer.  Joyland is certainly one of Stephen King’s best novels to date, and I sincerely hope all of his fans will have a chance to read it.  This book is one of those thrills we come across every so often when least expected!