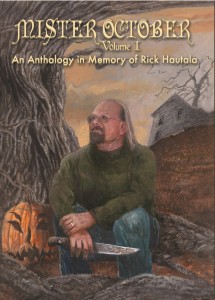 As many of you know, Rick Hautala passed away unexpectedly last spring.  JournalStone Publishing is releasing a tribute to this great author, and 100% of the profits will be going to the Hautala family.  There are some huge names in the world of horror that contributed to this effort, and you can buy a limited edition release of the book signed by ALL of the contributors.  You’ll never again see an opportunity like this.  To get your copy, simply click here.

Featuring over 45 individual contributors, almost 800 pages, over 240k words, original Clive Barker artwork, over 30 illustrations and so much content we had to put it into two volumes.

Christopher Golden – “On March 21st, 2013, I received a phone call from Holly Newstein telling me that her husband, Rick Hautala, had suffered a massive heart attack.  That piece of information shocked me into a surreal sort of panic, so much so that at first I could not make the leap to the next thing she said…that he had died.  It seemed impossible.  Rick had been such a good friend, such a consistent and stable force in my life, that the idea of him being so suddenly removed from this world…I just couldn’t make sense of it.

This isn’t the place for me to put my grief on display.  Suffice it to say that Rick’s passing hit me hard.  Not a day goes by that I do not feel the pain of his absence.

I have no doubt that readers will treasure this two-volume set.  It is my hope that as you read, you will ruminate a little bit about the man for whom we all have come together within these pages.  And I hope you’ll urge others to pick up their own copies of Mister October as well.”

All contributors have signed the limited editions.

EVERYONE – Both Volumes I and II