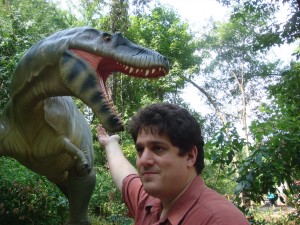 SAN FRANCISCO, August 3, 2013 – JournalStone Publishing (JSP) President, Christopher C. Payne and Dark DiscoveriesMagazine Managing Editor, James Beach, are pleased to announce the signing of author and longtime videogame writer, Richard Dansky, and for the publication of a new, regular column in Dark Discoveries focused on videogame reviews, news in the gaming industry, new hardware releases and what is driving gaming going forward.  The column will begin with issue #25, to be released on October 31, 2013, and recurring thereafter in succeeding issues.

Richard Dansky: The Central Clancy Writer for Red Storm/Ubisoft, Richard Dansky was named one of the top 20 game writers by Gamasutra in 2009. His credits include games from Rainbow Six 3 to the upcoming Splinter Cell: Blacklist, and has included work on franchises such as Far Cry, Ghost Recon,Might and Magic, and Driver. Richard is also a member of the advisory board for the Game Narrative Summit, and contributed to all 3 volumes of the IGDA Writers’ SIG series on writing for videogames. His most recent novel, VAPORWARE, is set in the world of videogame development, and is available from JournalStone.

JournalStone Publishing is a new and dynamic publishing house, focusing in the Science Fiction/Fantasy/Horror genres in both the adult and young adult markets. JSP also owns and operates the Hellnotes website, offering daily news and reviews of interest to genre readers and fans, and Dark Discoveries Magazine, a slick, full color, distinguished and internationally distributed quarterly magazine.  We publish in multiple book formats and market our authors on a global level. We are also active with numerous major writer’s groups, including the Horror Writers Association (HWA), and produce a monthly newsletter with a large circulation.