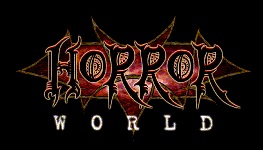 Horror World originally started out as Masters of Terror run by Andy Fairclough of the UK. The site featured message boards for UK horror authors. Several years later HorrorNet, which featured message boards for US horror authors folded and Andy invited them to MOT. Eventually Andy changed the name to Horror World and ran it successfully for several years before he decided that he wanted to pursue other interests. He posted in August of 2003 that he was going to let the site stay as it was unless he could find a successor. He actually found two – Ron Dickie and Nanci Kalata, with Ron leaving in August, 2005.

Nanci Kalanta: Nanci Kalanta took over Horror World in October of 2003.  She and Ron Dickie moved Horror World from an unhosted free site to its own URL.  Horror World has been nominated twice for a Stoker Award and twice for the Shocklines Shocker Award winning the Shocker in 2005.  Nanci has done marketing work for several NYTimes Bestselling authors and is the Reviews Editor for Cemetery Dance Magazine and will soon be Reviews Editor for Dark Discoveries Magazine.  She Co-Chaired the 2011 Stoker Weekend with Vince Liaguno.

Nanci lives in her dream location deep in the Shenandoah Valley at the base of the Blue Ridge Mountains.  She currently works from home in an office she shares with her two cats.  She is an avid book collector and reader.

JournalStone Publishing is a dynamic publishing house, focusing in the Science Fiction/Fantasy/Horror genres in both the adult and young adult markets. JSP also owns and operates the Hellnotes website, offering daily news and reviews of interest to genre readers and fans, Dark Discoveries Magazine, a slick, full color, distinguished and internationally distributed quarterly magazine and Bizarro Pulp Press, (next big thing in weird) an independent publisher of genre fiction.  We publish in multiple book formats and market our authors on a global level. We are also active with numerous major writer’s groups, including the Horror Writers Association (HWA), and produce a monthly newsletter with a large circulation.