Winner of the British Fantasy Award for Best Newcomer, D’Lacey is best known for his shocking eco-horror novel MEAT. The book has been widely translated and prompted Stephen King to say – “Joseph D’Lacey rocks!” 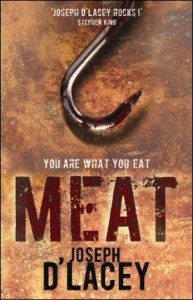 Abyrne, the last enclave in a wasteland. All food is produced by Magnus Meat Processing and controlled by the Parsons of the Welfare.

Richard Shanti, the ‘Ice Pick’, is Abyrne’s legendary bolt-gunner, dispatching hundreds of animals every hour to supply the townsfolk with all the meat they could want. But  Shanti is having doubts about his line of work.

When war breaks out between the corporate and religious factions, Shanti must sacrifice everything he loves in order to reveal the truth behind Abyrne’s power structures and fight for what he knows is right.

In a world where eating meat has become not only a human right but a sacred duty, what happens to those who question the nature of the food source? 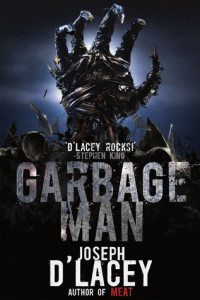 Shreve, a dead-end town next to the UK’s largest landfill.

There’s nothing the bored residents won’t stoop to in an attempt to spice up their pedestrian lives. All wannabe model Aggie Smithfield wants is to escape before Shreve swallows her ambition along with a million tons of rubbish and dirty little secrets.

Desperate, Aggie asks renowned but reclusive ex-photographer, Mason Brand, for help. The deal they make might be the only thing that can save her when the town’s fate catches up with it. Beneath everyone’s feet, something born of the things we throw away is awakening.

And when the past is reborn, there will be no escape.