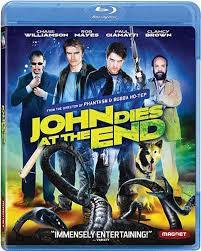 Director Don Coscarelli is at his best when he is free to do whatever the hell he wants and to take chances that will leave the audience gasping, giggling, or scratching their heads. After a pair of early rather normal movies, he embraced that way back in 1979 with his amazing and nightmare-like horror classic, Phantasm. He reminded everyone of that decades later in 2002 with the thoroughly awesome Bubba Ho-tep. And now Mr. Coscarelli is back at it, adapting David Wong’s impossible to pigeonhole and wonderfully wacky novel for the screen, John Dies at the End.

Now before we get to the good, and there is a lot of good here to get to, let me get the bad out of the way first. Namely the awful cover/poster art. It. Is. Horrible. It is your generic, and sadly far too common these days, photoshopped group pic of the actors in the movie striking poses. Oh, it does have a few tentacles on the ground. Yawn. Who put this p.o.s. together and who thought that it should be the “face” of this film? With all the wildly weird imagery you have in this movie, THAT was the best you could come up with for a poster? Sorry, but this cover is a complete and utter fail.

However, if that’s the only bad thing I can think of to say about this movie, and it really has nothing to do with the actual film, then that should give you a little hint about how good I think John Dies at the End is. But enough of me being coy, let’s get down to it.

The lead of the movie is a guy named David Wong (which is also the pen name of the author who wrote the book) who has a best friend named John. One day David gets an odd call from John asking for help. Going to the aid of his buddy, David finds him acting very weird. He says he’s on a new drug that goes by the name of “soy sauce” due to its dark color. David accidently jabs himself with the needle of sauce and this movie is off and running into the wonderful world of the weird.

David gets pulled in by the police because everyone else at a party from the other night is now dead. That now includes poor John (hence the title) but that doesn’t stop David and John from communicating via hotdog. Speaking of dogs, David finds a good one named Bark Lee who belongs to a lovely one-handed girl named Amy who David is kind of sweet on. David wants to return Bark Lee to Amy, but he might want to wait on that as the dog saves his life on more than one occasion. Not to mention that it can drive his truck and talk to him. Or is that just the Soy Sauce kicking in? Because ever since dosing himself with it, David has been able to see the future, talk to dead people, know how much change is in a person’s pocket, spot horrible insect monsters no one else can see, and had a kick ass fight with an unreal cop’s flying mustache. Yeah, it’s just been one of those days.

Now made aware of the strangeness that’s all around him, David must help out his dead(ish) friend, John, take care of Bark Lee, avoid a cop who wants to clean up all the mess with fire and bullets, try not to get killed by monsters made out of freezer meats, find love, and a little something else, what was it…? Oh yeah, save the world from total destruction. Yeah don’t worry, I’ve sure he’s got all of that covered.

I hope this little Whitman’s Sampler of the weird is enough to whet your appetite, because going into any more detail on the insanities found in this flick would ruin their surprise, and this movie is best when it can come out of left field, smack you upside the head, and leave you reeling. To paraphrase AC/DC “If you want (bizarre), you’ve got it.”

Now if John Dies at the End only had outlandish stuff happening in just for the sake of it, like so many works in the bizaro subgenre seem to do, then this movie would have got tiresome very fast. Thankfully it actually has a complete, if way off-kilter, story. Not to mention well written and acted characters, strong direction, great practical effects, and passable CGI effects. Heck, it even has a very cool cartoon sequence in it and some gratuitous nudity at the end. It literally has a little bit of everything for everyone, and for me, all those ingredients came together perfectly to make one savory stew of the strange that I could not get enough of.

As for the extras and special features on this new Blu-ray from Magnet, an arm of Magnolia Pictures, there are a few to talk about. There is an audio commentary track with director Coscarelli, producer Brad Baruh, and actors Chase Williamson and Rob Mayes that was both informative and really fun. There is a making of featurette that sadly, at less than seven minutes long, really seemed pointless. There is another mini featurette that runs eight and a half minutes about the crazy creatures and makeup effects from the film. There is also an interview with actor and producer Paul Giamatti done by Fangoria that’s just under 10 minutes. Casting tapes, trailers, and seven deleted scenes from the flick bring the list of extras to a close. So there is a nice selection of goodies here, but most just aren’t meaty enough to be really satisfying, with the exception of the director’s commentary.

John Dies at the End is an amazingly trippy comedy with horrific sci-fi elements and memorable characters. The writing is snappy and tight and the direction is Coscarelli at the top of his game and that’s a very good thing. Sure the cover art is atrocious and the extras on the Blu-ray could have been filled out a bit more, but the actual movie is aces. If you like your flicks to do new things, JDatE will do that for you in spades. In this era of remakes, sequels, and tried been-there-seen-that movies, it’s nice to see something brutally fresh and original and this is that kind of movie. Will it be to everyone’s liking? No, but what really cool thing ever is? I highly recommend this fun, freaky flick to anyone looking for something different.