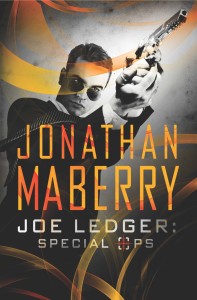 BREAKING NEWS!  "The film and television rights to Jonathan Maberry’s “Extinction Machine” and the Joe Ledger book series have been acquired by producers Tony Eldridge and Donna Isham.

Eldridge is a producer on Sony Pictures soon to be released Denzel Washington feature film “The Equalizer”. His Lonetree Entertainment production company has a number of film and television projects in development with the major studios.

Isham is a film and television producer with over 25 years of experience in the entertainment industry. As Executive Director of MIM she manages all facets of creative development alongside her partner and husband, award winning film composer and world-renown recording artist, Mark Isham.

Captain Joe Ledger. Former cop. Former Army Ranger. Currently the top-kick of Echo Team, an elite squad of first-class shooters who roll out to face down the world’s most dangerous terrorists. Not fanatics with explosive vests or political hostage takers. Joe and his team square off against terrorists who have the most advanced and exotic weapons of mass destruction. Designer bioweapons. Cutting edge transgenics. Real mad scientist stuff.

If they have to call Joe Ledger – it’s already hit the fan.

JOE LEDGER: SPECIAL OPS collects several of the Ledger short stories and presents two brand new tales exclusive to this volume. Bonus features include character profiles and a never-before-published glimpse behind the scenes of the Department of Military Sciences.