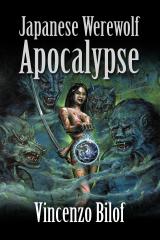 A tribute to Takashi Miike and Meiko Kaji.

The American has decorated her home in her parents’ blood; Ritsuko Kita’s life is spared, but she never forgets the man who killed her parents. A man who has vowed revenge against her kind.

Edmund Grant heard his parents scream. He didn’t see their bodies, but he would always remember the terrible creature he glimpsed in the moonlight.

In an ancient war between beast and man, Kita and Grant struggle against the forces of chaos and nature. They follow each other into twelfth century Japan, where a war between two rival families for the throne becomes a struggle for the fate of the world. Werewolves, samurai, gods, and lovers participate in the apocalyptic feud that spans nine hundred years, a feud that began when the world was born…

Upon the Floating Bridge of Heaven, a dream of love was conceived. A love that would span centuries and give birth to the human race and a rivalry that would decide the fate of the world.

Here is the Amazon link: