James Michael Rice Wants You To ‘Pray For Darkness’ 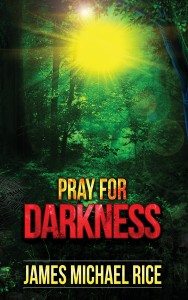 Early explorers called it the Green Hell, and for good reason. Consisting of more than a billion acres of untamed wilderness, the Amazon is a place of fragile beauty… and unspeakable danger.

When Ben Sawyer and his friends embark on an adventure tour in a remote section of the jungle, they plan on having the trip of a lifetime. But when their riverboat captain is murdered, leaving them stranded, their dream vacation rapidly tailspins into a nightmarish battle for survival.

Something sinister has been watching them, stalking them under cover of darkness.

Something that will not allow them to leave the jungle alive…

The trip of a lifetime tailspins into a desperate battle for survival when a group of tourists encounter a tribe of the undead deep inside the Amazon Jungle.

Pray for Darkness is the story of three twenty-something year old friends—Ben, Auggie, and Cooper—who head to the Amazon in the hope of creating some lasting memories before they are completely saddled by the drudgery of everyday life. Once there, they arrive at a rustic jungle lodge, populated by tourists hailing from around the world, and are immediately entranced by the fragile beauty of the forest and its creatures. However, it does not take long for their wanderlust to kick in, and they decide to up the stakes by venturing even deeper into the jungle to spend a few days at a remote campsite.

Under the watchful eye of their native guide, Ernesto, they abandon the relative safety of the tourist lodge and head to the remote camp in search of a “true” adventure. But when their riverboat captain is murdered and their boat disappears, their dream vacation quickly becomes a real life nightmare. Now they must brave the dangers of the wild as they make their way back to civilization.

And they are not alone.

A tribe of hungry corpses has detected the presence of the human intruders, stalking them under cover of darkness. Now and now Ben and his friends must use every resource at their disposal in order to survive the journey back to safety.

In his new novel, Pray for Darkness, author James Michael Rice draws from a wealth of personal experience while writing about an ill-fated adventure trip into the Amazon.

While developing ideas for his novel, Rice journeyed deep into the Amazon not once, but twice, in order to experience the jungle and all of its glorious (and potentially lethal) flora and fauna firsthand.

Rice explains, “While visiting the jungle, I was amazed by all the beautiful and deadly creatures that are common there… poison dart frogs, venomous spiders and snakes, caiman, piranha; the list goes on and on. Nevertheless, there is another side to the Amazon, a wondrous and beautiful side that possesses an almost hypnotic power. I knew that such an amazing, exotic location would make the perfect setting for my next book Combine that with the element of mystery (the vast majority of the jungle has yet to be explored, and amazing new species are being discovered there on an almost daily basis) and you have the perfect setting for a horror story. With so many movies, television shows, and books about the zombie apocalypse, I decided it was time to create an “origin” story to reveal where the living dead really come from… ”

James Michael Rice is the author of Rebel Angels, A Tough Act to Follow, The Still, and Pray for Darkness. He lives in Southeastern Massachusetts, and recently appeared in “The Bridgewater Triangle Documentary”, the first full-length documentary on New England’s own paranormal hotspot.