Jamais Vu: The Journal of Strange Among the Familiar – Magazine Review 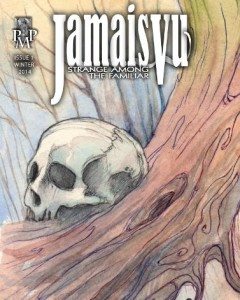 Jamais Vu: The Journal of Strange Among the Familiar

The new kid on the literary block is an outstanding addition. Lush and gorgeous, it’s a cornucopia of the thought-provoking and the elegantly unpleasant in a variety of formats. By the numbers, it’s 85 pages, six pieces of short fiction, four poems of varying lengths, four film reviews, two comics, three book reviews, and four essays.

“Video Nasties” by Max Booth III is a disquieting short story about casual violence and the root causes. So topical is the story that it is accompanied by two thought-provoking essays debating the role of media as the catalyst for a proliferation of violence.

The weighty discussion of violence and the media is also evidence of the issue’s shortcoming: the journal is almost too much of a good thing. When Harlan Ellison’s retelling of meeting Whitey Bulger at a Hollywood party for released felons, and a discussion of Terra-centric scripting in Doctor Who are the light-hearted pieces in the issue, it may be time to considering a little more levity in subsequent issue.

But, gangsters and Gallifreyans aside, Booth is not alone in disturbing the equilibrium. Jessica McHugh, author of the bestselling Rabbits in the Garden, offers her twisted answer to the question what happens when you take a Monkees song and filter it through the mind of Anthony Fremont. But that’s a good thing, a real good thing.  This is not to give short shrift to any of the authors. There is not a weak piece in the entire issue.

The print edition sells at under $7 USD, and the kindle version is even less expensive. I don’t think there’s a better bargain for a journal filled with both discomforting fiction and provocative prose. I look forward to the second issue.