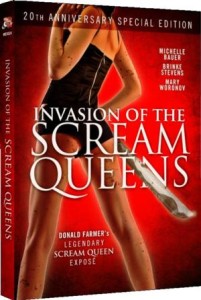 What would 80s horror have been without beautiful actress willing to take off their clothes, get covered in fake blood, and scream their lovely heads off? A lot more boring and a lot less sexy, that’s what. These actresses, labeled “Scream Queens” by many, were the backbone of horror movies form the late 70s, they had their peak in the 80s, were still taking care of business in the 90s, and continue, to a lesser extent, to do their thing today. Sure, not every horror movie needed them. The Exorcist, John Carpenter’s The Thing, The Shining, pretty much all the movies of David Cronenberg, and hundreds of other amazing horror movies never employed scream queens, and did just fine without them. But there were a ton of movies that were made far better because of these blood-splattered beauties. This documentary, made way back in 1992, celebrates these queens for that. But is it worth your time now? Well grab some popcorn and prepare to be titillated, the scream queens are invading!

First, let’s get something out of the way at the start, this documentary was made direct to video over 20 years ago. That’s right, it’s never been technically filmed (as that requires film being used) but videotaped. Furthermore, it is stuffed with tons of clips from low budget horror flicks of various quality (in both how it looks and the movie as a whole), so yeah this new DVD doesn’t look great. The doc parts look like a mid-eighties newscast at the best of times, and the movie segments range from blurry, to grainy, to hardly watchable. The whole thing has various video blemishes and flubs, such as missing scenes, blank screens, and even problems with the tracking. Yes, this DVD looks to have been recorded directly from an old VHS copy and not one ounce of effort has been put into making it look any better. That’s not me being mean, that’s me being honest.

Oh, and the audio often buzzes and hisses too.

That said, not only is this the first time this doc has been out on disc, it is the first time it’s been available since it’s small, early 90s video release. So the fact that it is now available to the masses at a much lower price then what the bootleggers were charging at the horror conventions, is a good thing in my book. As for the doc itself, I really enjoyed it. It is a long lost time capsule filled with clips form long lost horror movies. It has a bunch of interviews with some of the most famous scream queens ever to work in the biz (sadly, it is missing my favorite: Linnea Quigley) so you get a lot of candid inside info on the low budget movie making scene. But mostly for me, and I would wager for many horror fans, the highlight is the constant clip show of gloriously goofy, gooey, gory horror movies, with a healthy dose of nudity for good measure. It’s a trip down memory lane of forgotten fright flicks, and that is reason enough for me to like this documentary.

But, as they say, that’s not all. There are some nice extras on this new DVD release from Wildeye Releasing. There is an interview with director, Donald Farmer, from 2013 that runs over an hour. And you know how I was lamenting the fact that Linnea Quigley wasn’t in the documentary? Well at least they have her written introduction to the Invasion of the Scream Queens book (yes, there is a book) as a slide show with pictures. Speaking of pics, there is a behind the scenes photo gallery and a large collection of deleted scenes that run over 45 minutes.

I really liked this documentary, I only wish it looked and sounded better. But I’m guessing it couldn’t be made better without tons of money being poured into the project. Or who knows, maybe not at all. Maybe this was made from the one and only copy of this doc left in the world? Whatever the case, I am happy Invasion of the Scream Queens is back out for all the horror fans out there. Consider if recommended.