Interview with JournalStone editor and Dark Discoveries Editor-in-Chief Aaron J. French on the Horror Blog The Ginger Nuts of Horror 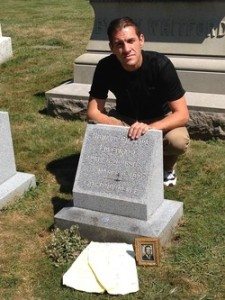 Here is a great interview with our very own Aaron J. French on The Ginger Nuts of Horror, another great horror website.  You may remember him as the review coordinator for Hellnotes before he recently got kicked up to the front office to take on the duties of JournalStone editor and Dark Discoveries Magazine Editor-in-Chief.   I hope you enjoy it.

Aaron J. French (a.k.a. A. J. French) is currently a book editor for JournalStone Publishing and the Editor-in-Chief for Dark Discoveries magazine—a professional, internationally distributed print magazine specializing in dark fiction, currently on its tenth year of continuous publication and distribution. He has worked with and edited such authors as David Liss, Norman Partridge, Gary A. Braunbeck, Thomas Ligotti, Steve Rasnic Tem, Jonathan Maberry, F. Paul Wilson, and many others. In 2011 he edited Monk Punk, an anthology of monk-themed speculative fiction and The Shadow of the Unknown, an anthology of nü-Lovecraftian fiction. His latest anthology Songs of the Satyrs will be published in 2014 and features a brand new novella from New York Times best-selling author David Farland. Aaron also served as co-editor for The Lovecraft eZine for several months in 2012.

Aaron’s fiction has appeared in many publications including Dark Discoveries, Black Ink Horror, Something Wicked, After Death…, Bedlam, Beware the Dark, Chiral Mad, The Lovecraft eZine, and others. His zombie collection Up From Soil Fresh was published by Hazardous Press in 2013. Also in 2013 “The Order,” Aaron’s occult thriller novella about a Lovecraftian secret society, was published in the Dreaming in Darkness collection. His single-author collection, Aberrations of Reality, will be released mid-2014 by Crowded Quarantine Publications. He is currently an active member of the Horror Writers Association.

Aaron is pursuing a Religious Studies degree from the University of Arizona, where his main areas of interest and research include Anthroposophy, Western Esotericism, Freemasonry and Esoteric Orders, and Esoteric Christianity. His nonfiction articles on Thomas Ligotti, Alejandro Jodorowsky, and Karl Edward Wagner have appeared in Dark Discoveries magazine, while his online column “Letters from the Edge,” focusing on the occult, spirituality, rogue scholarship, esotericism, and speculative fiction, is featured regularly on the Nameless Digest website. His academic paper “Toward Christian Renewal,” which explores potential contributions of esoteric Christianity within mainstream Christianity, was published in 2013 by the peer-reviewed journal The Esoteric Quarterly. He is currently a member of the ESSWE, the European Society for the Study of Western Esotericism.

Could you tell the readers a little bit about yourself?

I started writing when I was in grade school, even helped produce a horror magazine with an artist friend that we passed out to other grade-schoolers until the principal made us knock it off. I took a break from writing after that, but read and read and read a ton of horror, like all Clive Barker ever wrote, all Steve King ever wrote, all Ramsey Campbell ever wrote, all the Lovecrafty man ever wrote… it was ridiculous, I truly had no life and wanted to escape what horrible life I did have. I dropped out of high school, but in my twenties I tried to start writing again, and here I am ten years later, making a real go at it. Somewhere in there I started editing, too, and now I’m a book editor for JournalStone Publishing and the Editor-in-Chief for Dark Discoveries magazine. If you’re a horror fan and haven’t subscribed to DD yet, first of all you must be crazy, and secondly what are you waiting for? The editorial team and I are getting all-original fiction from the biggest names in the industry, and some of their most interesting work. I’ve edited a few anthologies, as well, and my next anthology Songs of the Satyrs, with new stories from David Farland, Mark Valentine, John Langan, Rhys Hughes, Wilum Pugmire, and more, is due out in April from Angelic Knight Press. I’ve also gone back to school recently to study/teach religious and consciousness studies, and you can find some of my more scholarly work floating around on the Internet out there—including my online column for Nameless Digest, which focuses on rouge scholarship, the occult, and literary weirdness. Nameless is another one I’d strongly recommend subscribing to. The level of strange and unique content Nameless puts out is rather amazing.

– To read the rest, you’ll have to head on over to http://www.gingernutsofhorror.com/5/post/2014/03/horror-author-interview-aaron-j-french.html#sthash.IHVGdvVz.dpuf