Inspector of the Dead – Book Review 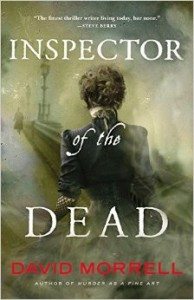 Recently, the Fall 2014 issue of Dark Discoveries concentrated much of its attention—in both fiction and non-fiction—on the possibilities inherent in secret societies in horror. It is a bit of a shame that I did not receive the ARC of David Morrell’s newest thriller, Inspector of the Dead, sooner, since had I done so, my contribution to DD might have taken a distinctly different turn.

Not that Inspector of the Dead is explicitly linked to horror. Indeed, as might be expected from a sequel to Morrell’s earlier Murder as a Fine Art (see http://michaelrcollings.blogspot.com/2013/03/david-morrell-murder-as-fine-art-well.html for my review), none of the traditional monsters of horror appear in this intricate tale of murder, madness, and revenge in mid-Victorian England. Darkness there is aplenty, and blood and gore, some tastefully insinuated, some described in intimate detail. But the story emphasizes the intellectual (and occasionally physical) exertions required for Thomas De Quincey, the notorious “Opium Eater”; his brilliant and resilient daughter, Emily; and their two stalwart detective friends from the London Police to solve a series of gruesome, upper-class murders that have a single point in common—clues left at each scene point to previous attempts to assassinate Queen Victoria and Prince Albert, suggesting a network of dangerous, unknown malcontents.

And the clues are moving irrevocably closer…presumably, to another attempt on the monarch’s life.

As did the earlier story, Inspector of the Dead encapsulates history, sociology, psychology (both current and nineteenth-century understandings), criminology, and literature in a complex web leading to devastating discoveries and—as promised—a cataclysmic confrontation in the Throne Room of Buckingham Palace itself.

All of these elements are intriguing, of course, but what makes the novel of particular interest for me is that at its most fundamental levels, it is about monsters, the most devastating kind: human beings. There are allusions to other sorts, as when customers at a pub, having drunk doctored beer and gin, hallucinate creatures and break out into a deadly public brawl. But throughout, the story concentrates on what transforms humans into monsters.

For some, monstrousness is an almost unavoidable response to rigid Victorian morals, standards, and values. Churchgoers in the finer parts of town see nothing wrong with turning away starving children, often condemning the children to a lingering death by starvation…or worse. In their world, social status determines individual worth, and, in spite of twenty-first-century attitudes, many of Morrell’s characters merely act the way they believe they are supposed to act. The main characters constantly confront this kind of unthinking evil as they move from the highest levels of society to the lowest and reveal to readers how tragically locked into assumption every stratum is.

Unfortunately, too many powerful and influential people turned their backs on a particularly egregious social injustice that resulted in the horrifying deaths of four Irish immigrants and set the surviving child on a course of revenge that would take dozens more lives in horrendous, meticulously planned murders.

Acting in the name of a secret society, “Young England,” a criminal mastermind manipulates private and public confidence in the government, the nation, the monarchy itself nearly to the point of revolution, so convincingly that everything the police attempt to track down the villain results in strengthening the hold the society exerts.

The substrata of political and social commentary ultimately merge with the plotline to provide a single sentence, quoted from the historical De Quincey, that illuminates the entire volume: “The horrors that madden the grief that gnaws at the heart.”

From such horrors come madness and desperation, obsessions with revenge and retribution…and human monsters.

Lest I have made Inspector of the Dead sound too much like a sociological treatise, readers can rest assured that Morrell provides not only opportunities for thought and consideration but also moments of high adventure, ranging from the battlefields of the Crimean War to the shadowed back streets of London’s worst districts. The book is a brilliant amalgam of history and fiction, of reflection and speculation, of possibility and probability. And a thoroughly enjoyable read from beginning to end.