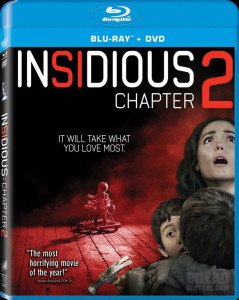 The first Insidious film I felt was rather uneven. Don’t get me wrong, there were parts of sheer terror in the movie, it was well acted, and very well directed by the only modern horror master working today (in my not at all humble opinion), James Wan. However, every time the dopy, red-faced, Darth Maul looking demon popped up, that one design choice killed any suspense, dread, tension, or anything else (other than unintended comedy) that they were trying to build up. Thankfully this new sequel wisely decided to leave old silly red-face out of it. Does that choice make the movie amazing? Or did the team of director Wan and writer/actor Leigh Whannell (both of Saw fame) come up with all new things to shoot their horror movie in the foot? Well grab your camera and a gasmask (points to you if you remember that part for the original Insidious) and let’s delve deeper into the further to find out.

Chapter 2 picks up right where the first one left off, but I won’t give away that movie’s little twist just in case you have yet to watch it. As for the non-spoiler synopsis, the focus this time shifts from the little boy who could astral project into the spirit world, or “the further” as it is called here, and to his father. Remember, daddy could also slip into that dark, scary world and has his own history with dark, spooky things. That is why that evil still clings to his family, and therein lies the black heart of the story.

Everyone from the first film returns for this one, including some faces that you wouldn’t expect to see again. As said at the start, thankfully there is no dopy demon here. Instead the “black bride” from the first movie takes center stage this time. The history of that unfortunate soul is fully explored here and how it is intertwined with the now twice haunted family. There are also a passel of truly creepy moments done with style by people who truly know how to make a good fright film. Insidious Chapter 2 doesn’t do anything new, but what it does, it does very, very well.

As for the extras on this new Blu-ray from Sony, there is sadly no commentary track, but there are a bunch of short featurettes. There is a 15 minute long, behind the scenes one called “Peripheral Vision.”  There is another featurette on the makeup used to make the ghosts called “Ghostly Transformations” that’s 7 minutes. There is “Leigh Whannell’s Insidious Journal” that is an 8 minute collection of behind the scenes videos taken by the writer/actor, Leigh. There some on location footage taken at the hospital that’s about 9 minutes long. There is a 23 minute long on set Q&A session. There are some short films collected in here called “Spectral Sightings” about the two comic relief ghost hunters from the movie that all together run over 12 minutes long. A collection of random trailers then bring the extras here to an end.

Insidious Chapter 2 is a very good sequel. It continues and evolves the story directly from the first film in an effective and frightening way. The acting is all very good and James Wan is perhaps the best horror director working today. He knows how to push the creepy button and not just rely on jump scare shocks, although he uses a fair number of those too. If ghost films are your cup of terror tea, you’ll love Insidious Chapter 2. I know I really did, so consider it well recommended.