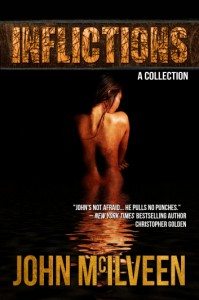 In his introduction to Inflictions, Christopher Golden describes John McIlveen as an author who “pull[s] no punches.” The short stories in this collection prove that sentiment accurate. McIlveen’s writing wraps around you like tentacles from a fog, and drags you into the ferocious mists kicking and screaming.

The stories in Inflictions are all loosely tied together under the broad theme of dark secrets. The tales examine the sinister secrets we lock away from the public. McIlveen tears away the façade of “normal” to expose the raw terror lurking within. Abuse, lies, transgressions, and fear haunt these pages. The title story highlights addiction, a topic threatening into the cliché, but in this case skillfully drawn in both sympathy and horror as we follow protagonist down an endless spiral into nothingness. In “Make a Choice,” we see a “typical” family trying to connect in a disconnected, modern world. Their attempt at “normal” turns into a terrifying nightmare (no spoilers here) that will chill the blood. McIlveen’s work reflects the ever-increasing isolation between individuals, and the monstrous results of that disconnect. His protagonists lose because they fail to see truth, reality, or their mistakes in time. Isn’t this the darkest, most terrifying fear we have? We will be the cause of our own downfall? McIlveen has found that glowing coal of fear in our hearts, and he’s ignited a firestorm.

The collection slows a little in the middle with “Jerks.” The idea is clever, but it’s long and doesn’t entirely fit with the pacing of the shorter stories. Overall, this is an outstanding collection. McIlveen even manages to sneak in a bit of humor amidst the horror to keep his readers from sinking into the abyss entirely. Very well done and highly recommended.