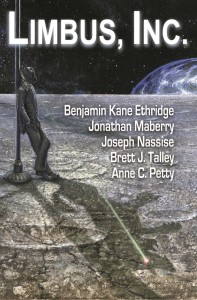 The small indie science fiction press, JournalStone Publishing, has a new book with some big authors. The press will be publishing a new anthology called Limbus, Inc., along with its sequel, in the spring. The first book, set for April, will feature stories from five authors, including Anne Petty, while the second book, Limbus, Inc. II, will also feature five stories, one by Joe R. Lansdale.

Petty is editing both books and Christopher C. Payne, president of JournalStone, said he expects the books to be “huge” for the small press. To that end, JournalStone is publishing 250 autographed limited edition copies of the anthologies–each will be a leather-bound hardcover with the autographs of all the contributing authors, as well as a bonus novella from Jonathan Maberry. The limited editions will be priced at $69.95 (excluding shipping). A standard print run will also be done, with plans for hardcover, paperback and e-book editions.

Payne said the anthologies came about after Petty approached him with the idea of the first book. The notion of a “shared world anthology,” as Payne describes it, was particularly attractive to him. “Each book contains five novellas and one overarching story that ties them all together. It unfolds as a story within a story as you are drawn into a world, not just reading another anthology.”

A third book in the anthology series is also in the works, though Payne said he has not yet lined up the authors for that title.