In the Shadow of Blackbirds-Book review 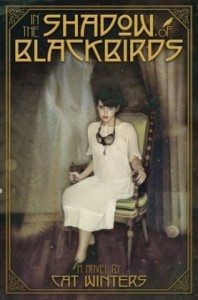 In the Shadow of Blackbirds

Dark, unsettling and atmospherically eerie, In the Shadow of Blackbirds is haunting in its own right.

A heart wrenching story highlighting the tragedies of the year 1918, caught between a world devastated by the First World War and emaciated by the Spanish Influenza. A great number of lives were lost and hearts were broken, as everyone feared for their lives. Death was a constant companion, knocking at everyone’s door. Between the war and the flu no one was safe, for both of them did not discern between race, rank, or social status, all were subject to be death’s companion. Leaving the door open for those who took advantage of the mourner’s heart, promising comfort and closure; for them, spirit photographers and séances became the answer.

Mary Shelly Black, an aspiring scientist in a man’s world, suddenly gets caught up in the wake of the flu. She is sent to live with her Aunt and abruptly gets thrown in a world that reeked of death and fear. Mary Shelly Black couldn’t help but to be slightly mortified by the morbid display of death; stacks of coffins lined the undertaker’s yard, and bodies lined the streets. The stench was overwhelming even though everyone roamed the streets with gauze mask covered faces, chewed garlic gum, and ingested onions trying to keep death from knocking on their door.

Just when Mary thinks death has skipped her door the news of her first love dying in battle sends her to question her belief of ghosts and messages from the beyond. Forced to pose for acclaimed, “Spiritualist Photographer” Julius Embers, Mary’s life turns upside down as she is thrust into questioning her own beliefs of the spirit realm, when her first love appears to her in spirit form.

Mary soon learns that it is up to her to solve why he has returned and how to solve the mystery of the harrowing corpse eating blackbirds, so that he may finally rest in peace.  Introducing you to scenes where Mary’s first love returns to her in his bleakest moments; of corpse filled trenches lined with mud, filth and rats, her life soon turns into an empty shell of mystery, murder and death.

The novel is illustrated with eerie and unsettling early twentieth century photographs, which immerse you deeper into the era and transport you to a forgotten time of utter loss and devastation.  Helping you picture the setting is a story that was so intensely researched with rich historical accuracy.

Like the plain wooden boxes that line the streets with their death, Cat Winters lays the horror of 1918 before you in a way that can’t be ignored.   It takes you on a horrifying emotional journey that is equally beautiful as it is haunting. Whether it be the ghosts, the inauspicious photographs, or the horrors of war and the Spanish Influenza, this book is definitely worth reading.