IN THE FLESH – DVD review 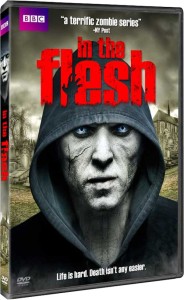 IN THE FLESH – DVD review

That was my first thought when I heard about this new BBC series. Now to be certain, I love zombies. I was a zombie guy before it was cool to be. I loved the rotting flesh-eaters back in the 80s and 90s when everyone else was gaga over vampires and serial killers. That said, there has been a glut of zombies in all forms of media for the last what, five, seven, nine years? Seriously, it seems like right after Zack Snyder’s Dawn of the Dead remake reminded people that zombies could be (A) cool and (B) profitable, there have been more zombies that you can shake a bloody intestine at. In movies, books, TV shows, video games, board games, card games, t-shirts, comic books, cartoons, TV commercials, and on and on it goes. And sadly, most of all that has been the same old, same old. And yeah, I thought this British import would be more of the same.

Thankfully, in this instance, I was very much wrong.

In the Flesh begins with the same old zombie apocalypse, but before you can say “Ahhh, zombies, run!” things are turned on their head when a cure to the zombie plague is found. And by cure I mean that in a very literal sense, as in they have found out to turn the flesh-hungry undead back to life. Well, sort of. They are still technically dead, but they have regained their self-awareness and self-control. They remember who they were before they died, and even retain some murky memories of their un-life as a ravenous, mindless, eating machine. Now since they are still dead, they don’t exactly look normal. But with flesh-colored cosmetics, contact lenses, and some drugs pumped into their brains every day, they can at least look and act like everyday folks.

Enter Kieren Walker (ha, get it, the last name, ha!) a young man who just before the big zombie uprising committed suicide. Then came back as a zombie and ate some folks. You know, as zombies are wont to do. Now he’s “cured” and back living in the small town he came from with his parents and his sister. The problem is, everyone there knows he was once a zombie, or “rotter” as they call them. And even though the government says that anyone suffering from partially deceased syndrome (PDS) (that’s the polite term for ex-zombies) should be treated as everyone else, some survivors of the zombie rising just can’t let bygones be bygones. Like a Holy Roller priest, or the leader of the local anti-zombie militia who slew lord knows how many undead to protect his town, or even Kieren’s own sister, who was part of that zombie bashing militia.

This story of a new kind of class warfare and old prejudices that refuse to stay dead is told through three, nearly one-hour long episodes. There are angry mobs, zombie terrorists ranting on the internet, necrophilia, roaming wild zombies, parents in denial when loved ones come home dead, and plenty of small town tongue wagging. There are some gory bits, lots of funny bits, and even some bits that made this old horrorhead a bit weepy. Everything is exceptionally well told, directed, and acted and the three episodes here tell a complete story, but still leaves things open should they want to make a second season. Here’s hoping they will, as this season definitely left me wanting more.

Now here is the part where I discuss all the special features on the new DVD from the BBC.

Yes, sadly this DVD is as barebones as it gets. Besides three awesome episodes of a great show (and really, that’s all that matters) there is nothing on here. Come on, BBC, that’s a crying shame and in this day and age all but inexcusable.

Total lack of goodies aside, In the Flesh is a hell of a fine show and one not to be missed. It is more interested in the drama and the comedy aspects of a world where former zombies are forced back into society than the horror. So anyone looking for some Romero-style zombie action may be disappointed. Anyone tired of the same old thing when it comes to the hungry undead should rejoice that this show exists. Lastly, anyone looking for a great TV show that just so happens to have zombies in it should love it. I sure did, so I can easily and highly recommend this DVD.