In Search of … The Complete Series 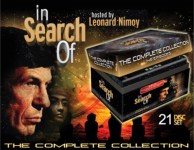 Entering our galaxy for the first time in any home entertainment format is In Search of … The Complete Series, available December 4th in a special DVD collector’s set from Visual Entertainment, Inc. (VEI).

Hosted by the iconic, Emmy Award-winning Leonard Nimoy (Star Trek), this popular, documentary television series (1976-1982) traversed the globe with a team of researchers, scientists and highly skilled technicians to conduct in-depth investigations of a wide variety of mysteries and to explore the unexplained.

From the rumored existence of Nazi plunder to the real-life inspiration for Sherlock Holmes to tracking the Loch Ness monster to reincarnation to UFO cover ups (and much more!), it’s an entertaining romp that no sci-fi fan, mystery enthusiast, scientific devotee or history buff will want to miss!

Includes: 152 episodes on 21 discs (approx. 63+ hours). Bonus: Two Rod Serling-hosted specials, which aired prior to the start of the Nimoy-hosted series; and the re-launched 2002 series (eight hour-long episodes) hosted by Mitch Pileggi (The X-Files).

In Search of … The Complete Series is presented in full screen (aspect ratio: 4×3) and stereo.