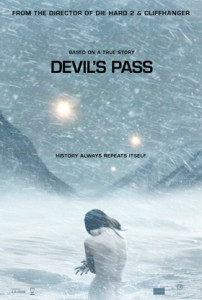 On behalf of IFC Films we are pleased to share the official trailer for their upcoming film, DEVIL’S PASS. Directed by Renny Harlin (Die Hard 2, Cliffhanger), the film follows five American college students as they explore the infamous Dyatlov’s Pass in hopes of uncovering the mystery of nine Russian hikers who made the same trek in 1959 – only to be found dead two weeks later.

The real life mystery of the Dyatlov Pass Incident has baffled investigators and researchers for decades, and rumors have attributed their strange deaths to everything from  alien encounters to government conspiracies. Check out the brand new trailer to join a new generation of explorers as they make their way through the infamous Ural Mountains and uncover secrets more shocking than they could have ever imagined.
DEVIL’S PASS opens in select theaters and will be available on cable VOD, as well as digital platforms (including iTunes and SundanceNow) on August 23rd. Please find additional information and assets from the film below – including the official poster.