I Have a Bad Feeling About This – Book Review 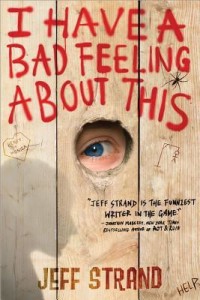 Nerds have been treated the same for centuries. None of it good. I can only personally vouch for half of my own current century. However, I feel reasonably certain that Archimedes was familiar with the wedgie. I also feel just a little less reasonably sure that Jeff Strand knows something about wedgies. How else could he put so much humor that feels like “I’ve been there” in his main character Henry Lambert of the very funny Young Adult novel, I Have a Bad Feeling about This?

Henry might best be called a wimpy kid if not a nerd. He is a smart and likeable kid…whatever that gets you in the childhood food chain. He gets picked last in all the playground sports. He is scared of a lot of things including seahorses. “I’m not proud of that one.” he says. His father, with clear reluctance from Henry’s mother, signs him up in a survival camp to make the proverbial man out of him. What is advertised as a professional boot camp environment is really a barely hanging together camp whose victims include five boys led by a drill sergeant type who, if not the guy from Heavy Metal Jacket, is at least to be trying to emulate him.

I Have a Bad Feeling about This is one of those YA novels that will appeal to children and teens because they can identify with the protagonists. The humor is plenty but grounded in reality and not condescending. The sharp humor is also why this novel will appeal to adults. The first half of the novel deals with the boys learning, but just barely, the survival skills of the instructor. Some of the funnier moments are derived from these events such as their first time at archery (“That bird shouldn’t have been there”). There is also a sweet moment when Henry meets a girl from the music camp down the road. As a veteran of teen music camps, I can assure you that we are bad ass! The boys are not placed in danger, which eventually comes from an unexpected chain of events, until the second half of the novel. While is it fun to watch the kids awkwardly defend themselves, I found the real strength of this tale in the first half where we can identify with the teens’ reluctance struggles. Yet the entire book is a delightfully fun read. The author also does us a service by adding in helpful survival tips like “Tree bark is not edible, even with peanut butter.”

Overall this is one of the funnier and more enjoyable YA novels I have read. I admit I am not an expert in YA books but I have a lifetime of expertise in nerdology, so that has to account for something. It is a truism that in the long run, nerds do better in life than jocks but that is little comfort for the young adults struggling with the fine art of growing up. Books like this are helpful in giving a good perspective. OK. So I may be exaggerating! It is still a funny book!