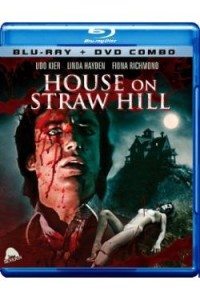 It’s rare I get a movie sent to me for review that I’ve never heard of, but such was the case when I got this one from Severin Films. Loudly and proudly proclaiming on the back cover that it was “totally uncut & uncensored for the first time ever!” and that it was “one of the most controversial and unsavory British horror films of the 1970s” I didn’t know what to expect. That combined with the always gloriously insane Udo Kier and I knew I had to see it. So I popped in the Blu-ray and here are some of my initial thoughts as I first had them.

So this movie was put together from the last three known prints in the world! And therefore a disclaimer at the start that some of the video will be less that HD quality. That does not bode well.

Two minutes in and right to the gratuitous nudity. Hmm, that does bode well. Very well, indeed.

Udo Kier puts on latex gloves before he has sex with his wife? Uhm, OK, but if she’s that dirty, do you really want to roll around naked with her?

Whose voice is coming out of Udo’s mouth? It certainly isn’t his, but it is awesome.

OK, between the latex sex gloves and the visions of himself committing suicide, Udo is playing a nut job. What a surprise!

That less than HD quality disclaimer wasn’t joking. Some of these scenes look like they were dragged across a truck stop’s men’s room floor after free chili night.

Hmm, she’s pretty (Linda Hayden) where have I seen her before? (One IMDb search later) oh yeah, Blood on Satan’s Claw. Awesome.

Who knew Udo Kier could kick ass? No really, he just beat down two thugs in the street. You go, Udo!

At the sight of the two men Udo beat up earlier watching Linda in the field enjoying some “me time”, I assume this flick is going down the I Spit On your Grave path.

One minute later: nope, I was wrong. Good on you, movie, for fooling me.

And all that was in the first 30 minutes of this film. To be sure, I kept on being surprised by this movie as I watched, but to list them all here would take forever, so let’s cease with the play by play and get to the usual nickel tour of the plot.

This film, also known as Trauma and Exposé, has Udo playing a novelist who is having trouble writing his next book because of paranoid visions. He rents a house out in the country for some peace and quiet and hires a new, pretty secretary to help him finish his new novel. Lots of sex then follows, there are a few murders, and someone one is keeping a secret that will come out with deadly results. And without getting too far into spoiler territory, that’s about all there is to this movie. The cast can be counted on two hands with plenty of fingers left over, and most of them are in the movie for just minutes. House on Straw Hill is far more interested in sex appeal than scares or mystery, so it quickly becomes a collection of nudie scenes. Sure, there are some murders that happen here, all of which by today’s standards are very tame, but this movie is far more of an erotic thriller than any form of horror movie. There is also a bit of a whodunit element in here, but if the big reveal of who the killer surprises anyone I would be astonished.

The new Blu-ray/DVD combo pack from Severin Films has a few extras worth noting, and a nice surprise, but I’ll get to that in a moment. For House of Straw Hill, there is an audio commentary track with director James Kenelm Clarke and producer Brian Smedley-Aston. There is an interview with actress Linda Hayden that runs over 14 minutes. There is also a trailer. However, what is not listed on the box is one hell of a very cool bonus: an extra DVD with the feature length documentary called Ban These Sadist Videos all about the video nasty nonsense that happened in the UK during the 80s. If you know anything about those days of censorship run rampant, you will dig this doc. I sure did. In fact, it’s so good that it’s worth getting this Blu-ray for it alone.

When it is all said and done, I did enjoy House of Straw Hill, mostly for the odd bits. The things that came out of nowhere and left me either scratching my head, smiling, or more than once, outright laughing. That’s why I included my initial thoughts on this movie in this review. If any of that weirdness sounds even remotely interesting to you, then you might want to give this flick a try. Consider it recommended.