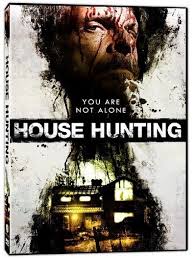 Making a good haunted house film is not easy. By my estimation, there have been less than ten in the history of horror cinema that have actually endured. Haunted house films such as Tobe Hooper’s Poltergeist, Robert Wise’s original version of The Haunting, the Paranormal Activity films, and the 1930’s classic The Old Dark House are prime examples of solid classics in a sub-genre that is hard to crack.  Most haunted house films are pedestrian, silly, and not at all scary; case in point being the massively overrated The Amityville Horror and its abysmal remake.

First time director Eric Hurt begins his career with House Hunting, a “haunted house in the woods” film made on a low budget and shot in only three weeks. The story concerns two families who arrive at an isolated home deep in the woods. Both fathers, played by the underused character actor Art Lefeur and The Beastmaster himself Marc Singer, are looking to relocate from the city and want the house. They are greeted only by a recorded message urging them to enter. When they do, they are confronted with true terror and both families flee the home. The catch; no matter how many times they try and how many different paths they take to get away, all roads lead back to the house, a la John Carpenter’s In the Mouth of Madness. In an interesting bit of screenwriting, we forward to one month later and the families are still at the house and are no closer to being able to leave nor have they discovered what the ghostly force is that is keeping them prisoner.

The families have begun to rely on one another yet are falling apart emotionally due to the hopelessness of their situation. They pass their time fighting, stressing about finding an escape, and, strangely enough, putting together a puzzle that one of the kids found upstairs. I assume this is used as halfhearted symbolism. Their paranoia begins to rise and soon we begin to learn about the dark pasts of the family members.

So far, so good and for the film’s first half I was intrigued to see where we would go. Sadly, the film dissolves into another film where everyone is yelling as moods become violent and performances get hammy. Yes, the patriarchs of the two families will kill to keep the house satisfied.

There is a small twist which I will not reveal but it didn’t help the film. By the end I was tired of the squabbles and bloodletting and felt that I had been here a dozen or more times in better films.

The performances are okay with LeFeur giving a solid turn as one of the fathers. Singer is an actor I have never liked and he does nothing to change my mind here. When it is his turn to become maniacal he induces laughter rather than chills.

Director Eric Hurt possibly has a good horror feature in him. The beginning of this film creates a good atmosphere and we witness a few creepy moments such as the first contact with the house, the fruitless attempts to flee, and the appearance of a ghostly (?) girl covered in blood. Kudos to the filmmaker for giving us a fairly creepy and taught first half and a somewhat original idea with his screenplay. The final half of the film is less memorable and does not work as a horror film or as a Twilight Zone styled mystery, which is what it becomes.

What starts as a good haunted house film with a couple of good scares turns into a JJ Abrams Lost-like wannabe with the inhabitants turning from good to evil and back again. Who do we root for? Who is the real villain? Will anyone make it out alive? What do the ghosts want? By the film’s end, I no longer cared.