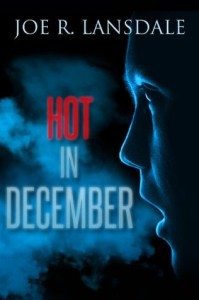 Hot in December by Joe R. Lansdale is one of those fantastic surprises that spring from out of nowhere and catch you completely off guard.  Once I managed to get a copy, I couldn’t wait to read the story and just spent the last two hours with my eyes glued to the monitor and another hour writing this review.

Hot in December is reminiscent of Mr. Lansdale’s earlier novels such as Cold in July, Act of Love and Waltz of Shadows.  There’s also mention of Hap Collins and Leonard Pine in the story, and Sunset Jones from the novel Sunset and Sawdust, and Cason Statler and Booger from Hap/Leonard’s Devil Red.  So, it’s kind of like a big family reunion.  I was secretly hoping Hap and Leonard were in this novel, but instead we have Cason and Booger playing a nice substitute.

The story takes place right before Christmas when East Texas is experiencing a heat wave during the month of December.  Tom Chan is busy grilling some hamburgers out back of his home when a speeding car runs over a woman out front.  Tom takes a fast glimpse around the corner of the house and sees the driver dead on.  Unfortunately, the neighbor is killed and the driver takes off, leaving the scene of a crime.

When Tom later tells the police what he saw and takes a good look at the mug books, he’s warned that the driver of the car is the son of a crime kingpin, who may be part of the Dixie Mafia.  Testifying is the right thing to do, but the police warn Tom that it will also put him, his wife, Kelly, and their little daughter, Sue, in danger.  The criminal element, however, isn’t going sit back and allow a trial to take place, or the son of a criminal kingpin to go to jail.  It’s too easy to just murder Tom and his family, and then there’s no one to testify.

It isn’t long before Tom and his wife are threatened by the Anthony clan and the people under them.  Tom quickly realizes that the police won’t be able to protect them, and they may even be part of the problem.  Not knowing whom to trust, Tom begins to understand that even if he doesn’t testify, he and his family will still be in danger.  The Dixie Mafia won’t allow any witnesses to the crime to live for long.

The only way for Tom Chan to solve the problem is to get the help of some of his old Army buddies and to take the fight to the Anthony clan, killing every last one of them.  The question is can he and his two buddies handle a dozen mob-like guys and then live to tell about it?

You’re just going to have to read the novella to find out.

The author doesn’t hold back on the violence or the humor he injects into the direst of situations.  Like all stories by Mr. Lansdale, the reader is captured in the first couple of pages and quickly finds himself literally compelled to finish the story come hell or high water.  I had a lot of writing to do today, but once I started Hot in December, I had to finish the story.  Nothing else mattered.  When a reader finds himself hooked like this, it means the writing and the story are top notched and not to be missed, even if the world is coming to an end.

I don’t know what Joe Lansdale is working on right now (another Hap/Leonard novel?), but Hot in December is certainly a pleasant treat to break up those long months in between Joe R. Lansdale books.  And, of course, anything by Hisownself is highly recommended.