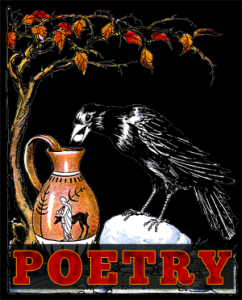 To celebrate National Poetry Month, the Horror Writers Association will be holding their inaugural HWA Horror Poetry Showcase in April 2014.

Open to all poets, the Showcase will be accepting submissions throughout the month of April with four poems chosen by HWA member judges to be honored on the HWA website.

Submissions will be accepted via Submittable from April 1-30, 2014 and all rights will remain with the poets. Those interested in submitting should visit www.horror.org on or after 1 April to access the submissions link.

We are looking for more than “blood, guts, worms,” etc. Just being “Icky” isn’t enough. Poetry to fifty lines. Free verse preferred; no forced rhyme or cliches. Unpublished poems only (though previously published poets are, of course, welcome).

Submissions will be accepted via Submittable from April 1-30, 2014 and all rights will remain with the poets.

In addition, at the judge’s discretion, an electronic chapbook of qualifying poems will be considered for publication under the aegis of HWA. Each poem chosen for publication will be paid $5.

For the 2014 Showcase the judges will be Marge Simon, Peter Adam Salomon, and Jonathan Maberry.

– Marge Simon is a past president of the Science Fiction Poetry Association and editor of Star*Line. She won the Best Long Poem Rhysling (1995), the Bram Stoker Award for Superior achievement in poetry (2008, 2012), the Strange Horizons Readers Award (2010), and the SFPA Dwarf Stars Award for short poetry (2012). Her flash fiction has appeared in Daily Science Fiction, Vestal Review, and more: www.margesimon.com.

– Peter Adam Salomon is a member of the Society of Children’s Book Writers and Illustrators, the Horror Writers Association, the International Thriller Writers, and The Authors Guild and is represented by the Erin Murphy Literary Agency. His debut novel, HENRY FRANKS, was published in September 2012. His next novel, ALL THOSE BROKEN ANGELS, a ghost story set in Savannah, GA, is scheduled for publication in Fall 2014.  His short fiction has appeared in Demonic Visions I and II and he was the featured author for Gothic Blue Book III: The Graveyard Edition. His poem ‘Electricity and Language and Me’ appeared on BBC Radio 6 performed by The Radiophonic Workshop in December 2013. He was also a Judge for the 2006 Savannah Children’s Book Festival Young Writer’s Contest, served on the Jury for the Poetry Category of the 2013 Bram Stoker Awards, and is the current Poetry Page Editor for HWA.org. www.peteradamsalomon.com.

Jonathan Maberry is a NY Times bestselling author, four-time Bram Stoker Award winner, and comic book writer. He writes the Joe Ledger thrillers, the Rot & Ruin series, the Nightsiders series, the Dead of Night series, and the Watch Over Me series.  He also writes the monthly comics V-WARS and ROT & RUIN, and has written extensively for Marvel Comics and Dark Horse. Two of his novels (Rot & Ruin and Dead of Night) are in development for film, and another (V-Wars) has been optioned for TV.  He teaches Experimental Writing for Teens, is the founder of the Writers Coffeehouse, and the co-founder of The Liars Club. Prior to becoming a full-time novelist, Jonathan spent twenty-five years as a magazine feature writer, martial arts instructor and playwright. Jonathan lives in Del Mar, California with his wife, Sara Jo. www.jonathanmaberry.com.