Horror in a Hundred – The Grim Reaper by Sheldon Woodbury 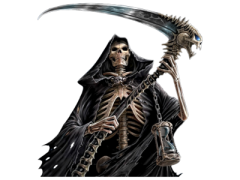 The shriveled old shape-shifter wondered what bewitching form  to slip on this time. It was from a nether region that had never been identified, but its exploits had, as a monster, an angel, a wraith, and a demon.  It was the maker of myths, bringing magic and wonder into this earthly realm.  But now it was dying and it had one last disguise to slip on.  It chose The Grim Reaper, because now, when it gurgled its last breath, and its black shrouded body collapsed to the ground, this world was given at least some warning that enchantment was dead.