The Coachman and the Creek
by  Cynthia Morrison
2014
“Oh Lordy!” the approaching man shouted. He sported a waistcoat and riding Boots.  Behind him was an Indian dressed in skins upon a running horse while raising a tomahawk at his fleeing subject. They were running straight at Dante so he threw himself to the ground covering his head. Hooves and screams passed like a whirlwind. Dante raised his head only to find that there was no one in sight. He hadn’t even felt a brush when they bowled right over him. The ghosts of the Coachman and the Creek Indian had crossed paths with Macon’s notorious escaped convict. 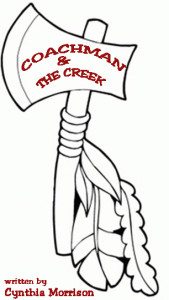