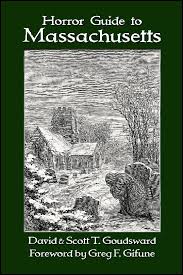 Geography riddle: in which state can you find killer sharks, vampires, black widows (the women, not the arachnids), the original Ouija board, and, of course, witches? It’s not really a riddle since the answer is found both in the title and within the pages of Horror Guide to Massachusetts.  The Guide combines fact, fiction and fable and is mind boggling in its thoroughness.  Alphabetized by location, the Guide explains each and every connection between cities/sites and horror history.  Massachusetts’ rich literary backstory is highlighted, as well as connections to television shows and movies.  Some offerings are more fantastic than horrific (for example, the movie “Splash”), yet that illustrates the depth the guide plumbs as well as the gems it uncovers.  The Guide is simultaneously painstakingly detailed and widely comprehensive. It is also chock full of love for the state and its proclivity for ghouls, gangsters, and ancient graveyards.

The Goudsward brothers know a thing or two about horror and are familiar names themselves within the Commonwealth. Their goal was to create a resource that inspires a researcher to look up an old story or film. While not a beach read, Horror Guide to Massachusetts is a useful tool for those interested in The Bay State, and stories thereof.  It would also serve well as an impetus for a highly competitive trivia game (best played amongst NEHW members, I suspect).  This book would make a wonderful gift for the horror connoisseur, and an even better weapon to use against that know-it-all New Englander in your life.