Horror for a Good Cause 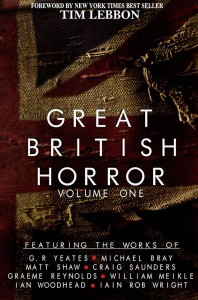 In July 2013, eight of the most successful independent authors in the United Kingdom had an idea. That idea was to release an omnibus edition of eight complete novels and novellas for a limited period only, with all profits being donated to Centrepoint, a charity that supports homeless children and young people in the UK.

The box set will be released on the Kindle on Thursday 22nd August 2013, and will be free for the first five days, to push it up Amazon’s lists, at which point it will revert to its normal price of $5.99 / £3.95. The title will be removed from sale on Friday 22nd November 2013.

People who get the book for free are encouraged to make a donation to the project’s Just Giving Page.
https://www.justgiving.com/Great-British-Horror-Volume-1

A new indie horror omnibus featuring the heaviest hitters in the genre.

Acclaimed writer G.R. Yeates builds terror upon terror, as three friends are drawn back to their past to face a living nightmare in ‘The Thing Behind the Door‘.

A man in love will do anything to win the heart of a beautiful woman. In Matt Shaw’s popular introduction to the Peter Chronicles, we find out just how far Peter will go to woo his latest love. Dark, disturbing, with an undercurrent of Shaw’s trademark black humour, you’ll grow to love Peter…but will Vanessa?

Good fences may make good neighbours…but in a flat, it’s good insulation that makes for good neighbours. In Saunders’ tale, ‘Insulation‘, a writer discovers just what her neighbour’s been up to with the previous tenants.

In his breakout novel ‘High Moor‘ Graeme Reynolds pits werewolf against werewolf in this stunning debut. Master of Ceremonies over this unholy first volume of Great British Horror, Reynold’s werewolves are brutal and bloody in the first book of the High Moor trilogy.

William Meikle’s fiction spans the globe. Author of more than 200 short stories and countless novels, he brings us ‘The Copycat Murders‘. In it, Meikle breathes new life into the murder yarn with a wicked, supernatural twist when a detective travels beyond the borders of our reality to capture a murderer…into Mirrorland.

Ian Woodhead brings his trademark imagination in a gritty tale of shape-changers ‘Duplicity‘, but the heroes might not be who you expect when anything can be anyone and everyone can die.

Fast becoming one of Britain’s bestselling horror authors, Iain Rob Wright’s offering introduces us to ‘Sam‘ a little boy with a secret. Sam is no ordinary child, and when he’s threatened, Sam’s secret will come out at last and blood will flow.