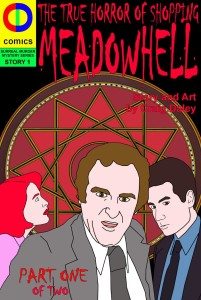 The True Horror of Shopping

Meadowhall Shopping Centre is situated just off the M1, between Sheffield and Rotherham in the UK and appears to be just like any other mall, but CDComics first Surreal Murder Mystery brings that into question.

The narrative deals with the gruesome murder of three Security Guards just prior to its opening. The bizarre murders take place on the night of the Summer Solstice in 1990 and D.C.I Bramley of the Metropolitan Police is called in to deal with the triple homicide. The fast paced investigation that follows leads the Police into areas they had not expected and ends with several shocking and surreal revelations.

All the clues to solve the murders are in the two 32 page full colour comics, so why not test your investigative skills and your knowledge of the occult and paranormal by trying to solve the crime, but be warned this story could change the way you shop forever.

Craig Daley previously worked as the writer/artist on the comic strip, The Jerks, for the national magazine, Making Music, but stated that this was a return to his roots, preferring the longer comic book format.

There are three more stories from the Surreal Murder Mystery Series, Spring Heeled Jack, Football Crazy and The Butcher of Banner Cross.

CDComics are available to download priced $1.99 from the following websites: