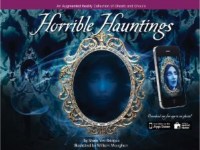 The ghost of Abraham Lincoln floats around the Oval Office, hovering near the desk before turning to cross the room again, placing his hands behind his back, deep in thought. Turn the page and the sounds of a horse whinny and hooves on cobblestones precede the arrival of the headless horseman, holding his bloody severed head and moving ever closer to the reader. A few pages later the Amherst Poltergeist haunts a Victorian bedroom, where an invisible hand writes, “Esther Cox, you are mine to kill!” on the wall above the bed. Trace a finger on the iPad screen and the poltergeist sends objects – chairs, an umbrella, vases, and chamber pots – flying around the room.

Horrible Hauntings: An Augmented Reality Collection of Ghosts and Ghouls by Shirin Bridges illustrated by William Maughan is viewed in tandem with an app that enhances the story using both visual and audio effects. “As far as we can find,” author Bridges says, “Horrible Hauntings will be the first book that uses this latest generation of AR.” The app can be downloaded via iTunes or GooglePlay, and runs on iOS or Android. When a tablet or phone is held over the book’s pages, the app is activated and one of ten historical ghost stories comes to life.

Description: This exciting new book brings to life — quite literally — 10 famous hauntings from the annals of history. Using interactive augmented reality to enhance the images on the pages, readers are able to see and interact with 3-D ghosts, which appear to come alive and can be manipulated by the viewer. Lush illustrations of famous historical hauntings introduce readers to some of the most notorious and chilling ghosts throughout the ages. The Headless Horseman, the Flying Dutchman, Bloody Mary, the Amherst Poltergeist, and the princes in the Tower of London are some of the eerie apparitions that inhabit this book in a totally new way as readers interact with the illustrations on the pages.

About the Author: Shirin Yim Bridges is the award-winning author of Ruby’s Wish, The Umbrella Queen, and the Thinking Girl’s Treasury of Real Princesses series. She lives in Foster City, California. William Maughan is an accomplished commercial illustrator whose work has appeared in magazines, children’s books, and ad campaigns. He is the director of Graduate Studies in Fine Art Painting and Illustration at the Academy of Art University–San Francisco. He lives in Salt Lake City, Utah.

You can preorder on Amazon here: Horrible Hauntings