“With Harbinger, debut author David James Bright carves his name in the horror genre. His prose is elegant, his humor is razor-sharp and the story is compelling.”
-Jonathan Maberry, New York Times best selling author of Dead of Night and Assassin’s Code

“In the tradition of early Stephen King, David Bright spins a marvelous tale of madness, violence, and the enduring power of love to conquer evil in this surprising debut novel. Horror fans, prepare to lose sleep!”
-Aiden James, author of Cades Cove and The Raven Maker

When a mysterious fog sets upon the small town of Rowley, Pennsylvania, its residents quickly find themselves isolated from the world. As the thick haze envelopes their once peaceful town, all communication systems fail and residents begin to go missing. As order gives way to panic, the town devolves into violent lawlessness, every citizen with a score to settle acting out their darkest impulses, hidden by the cloak of fog.

Amidst the chaos, Ben Dowling realizes something is terribly wrong. It’s not just people acting crazy–there’s something more. There’s something out there butchering people. Something evil and vicious.

Something that is hungry.

Ben and his childhood friend Elise venture out into the unknown and confront the shadowy figure behind the mist. Dodging the chaos in the streets they have only each other to depend on as they try to save their hometown from complete destruction.

The Harbinger awaits them. 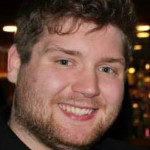 Biography
David J. Bright was born in Bayonne New Jersey and raised in Tafton Pennsylvania. He is a soon to be graduate of the University of Scranton. He enjoys reading and writing works of horror and transgressive fiction. He also is a huge fan of anything football related. He is a paradox. He is not a paradox.