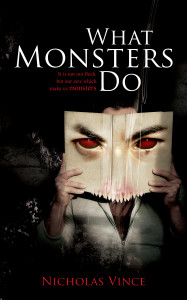 Hidden Basement Productions have teamed up with writer and actor Nicholas Vince to present psychological horror plays for this year’s London Horror Festival, at the Etcetera Theatre, Camden.

Nicholas, known for playing the Chatterer Cenobite in Clive Barker’s ‘Hellraiser’ film; has dramatised two stories from his collection, ‘What Monsters Do’, which is rated 5 stars on amazon.com. He is working closely with Hidden Basement Productions to bring them to the stage.

The show, ‘What Monsters Do’, consists of two 25 minute horror plays performed as a double bill. The stories, ‘Tunes from the Music Hall’ and ‘Green Eyes’ explore love, lust, obsession, the bond of family and the dark violence that lurks behind seemingly innocent people. Nicholas said, “The plays centre on the theme: it is not our flesh, but our acts which make us monsters.”

Directing the plays will be Philip North, co-writer and director of ‘The Puppetry of Flesh’, which sold out at last year’s London Horror Festival. He said, ‘I’m thrilled that a horror icon like Nick has chosen to work with Hidden Basement to bring his dark stories to life. It’s great to have such rich source material for a project. I think the piece is really unique and a must see for all fans of horror. I’m looking forward to unleashing these two disturbing tales on London audiences.‘

Nicholas Vince played The Chatterer Cenobite in Clive Barker’s ‘Hellraiser’ and ‘Hellraiser II: Hellbound’. He also played Kinski in Barker’s ‘Nightbreed’, and has been a guest at recent screenings of the restoration version; ‘The Cabal Cut’. After working on the movies, he contributed stories to the ‘Hellraiser’ and ‘Nightbreed’ comics published by Marvel.

His first published short stories appeared in Fear and Skeleton Crew magazines, and for the latter he created the series of interviews ‘The Luggage in the Crypt’. This featured interviews with Neil Gaiman, Joe R. Lansdale and Clive Barker.  In 2012, after working in the IT industry for sixteen years, he returned to writing full time with the publication of his short story anthology, ‘What Monsters Do’. He is currently working on his second volume of short stories:  ‘Other People’s Darkness and Other Stories’ and film projects based on other stories from ‘What Monsters Do’.

Hidden Basement Productions are a theatre company specializing in horror. Their first play The Puppetry of Flesh was premiered at the London Horror Festival 2012, and was a sell out success. Philip North’s theatre credits as co-writer and director include ‘Madame Everleigh’s Love Emporium’, ‘The Untimely Death of Mr String’ and ‘The Puppetry of Flesh’.