Hellnotes Interview with Rhiannon Frater, Author of The Mesmerized

Hellnotes is pleased to host Rhiannon Frater as she scours the post-acopalyptic wasteland  . . . well, as she scours the internet, on her blog tour in support of her new novel The Mesmerized.  Rhiannon was kind enough to answer our questions about zombies vs. Mesmerized, that Texas flavor of horror, and what readers can expect from her hypnotic new novel.

Hellnotes:  How is The Mesmerized different than your other books? What makes it special?

Rhiannon Frater:  Well, I did something I rarely do. I wrote a book not set in Texas! Except for my gothic horror novel, The Tale of the Vampire Bride, set in the early 1820’s in Eastern Europe, all my books have a Texas backdrop. That being said, our lead character, Minji Nordim is a tattoo artist from Austin, Texas.

The Mesmerized is a supernatural thriller at its heart. Many readers have told me it feels like a very fast-paced movie that they’re watching in their minds and they love the intensity.

HL:  Your fans love your wonderful array of characters most of all.  What inspires your characterization?

RF:  Weirdly, the characters just sort of appear. The Mesmerized started with a very intense epic image  in my head of transfixed people walking down Las Vegas Boulevard in perfect synchronization and heading into the desert. I knew the lead character would be a young woman from Austin and that she would have a small family. I struggled to see her for the longest time. I just couldn’t get a handle on her.

Then one day, I saw a young Asian woman covered in tattoos and I realized I had taken a wrong turn in assuming my lead was white. The second I grasped that my lead was of Korean ancestry, I was like “a-ha!”  In that moment, Minji vividly appeared in my mind’s eye and took up residence in my imagination. Then it was a matter of just paying attention to the muse and watching the movie screen in my head. I know this sounds weird and a bit insane, but sometimes I just have to sit back and listen to the voice chattering in my head to find out who my character really is. 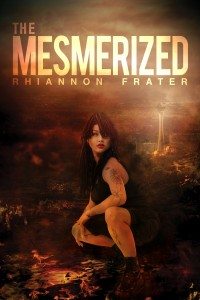 HL:  What can we expect from Minji Nordim?  Which character from your previous works is she most like?

RF:  Minji is a very cool character. She’s a doting mom, devoted wife, and a successful tattoo artist. With her dreadlocks, tattoos, and alternative look, she’s a bit imposing, but she’s very kind-hearted. Minji’s determination to save her family is at the root of her strength throughout the story. Even when she’s scared, it’s her desire to save her husband and daughters that spurs her on. Though she shares tattoos with Amaliya from Pretty When She Dies, she’s maybe a little like Katie from As The World Dies. Minji and Katie are both very calm in the face of adversity, but they’re very different otherwise. I’d never written about a mother taking care of her children during an apocalypse before, so it was a challenge and a delight.

HL:  Does The Mesmerized contain any surprises you might want to tease the readers with?

RF:  Well, at the end of the novel fans of certain lore might get a kick out of realizing what is actually behind The Mesmerized. I noticed people who aren’t fans of that lore assume it’s something else. Either way, it still works in the framework of the story.

HL:  You write about vampires as well as zombies.  Ever considered a Zombies vs. Vampires mash-up?

RF:  This question made me laugh aloud. I’m asked to do one all the time, but I kind of already did it. The Pretty When She Dies trilogy has necromancers, vampires, and zombies. The necromancers control the zombies, but it’s a melding of two of my favorite genres. The zombies are quite different from the flesh eaters, of course, but can be very, very dangerous.

HL:  How do you motivate yourself to write?  What inspires you?

RF:  I’ve only had two stories not come out of my dreams, so I have to say my nightmares are the fertile ground of my imagination. What usually motivates me to write is that I want to read the book I’m writing. I want to see how it ends.

HL:  What is your writing process?  Do you outline or just blast off into space, so to speak?

RF:  Usually when I have nightmares that feel like something more, I write the dream down. If it sticks with me, I know it’s the seed of a story. Over time, it starts to grow and I get glimpses of the greater story arc and characters.  When it starts to hound me, I know it’s time to write. I usually know how the story starts, who the characters are, and the general arc. Sometimes I have the ending. Once I jump in, the story usually just explodes and I just follow behind trying to transcribe what I see in my head.

HL:  Is there any other genre that you’d like to try your hand at?  Anything bizarrely Unzombie?

RF:  Well, I love science fiction. The Last Bastion of the Living and its sequel definitely straddles the line between sci-fi and zombies. I love that world. It’s a blast to explore and I love the tech. I’d love to write a completely non-horror science fiction novel, but we’ll see.

HL:  In your home state, do you feel there is a certain Texas flavor to horror?

The Czechs, Germans, and Mexicans have all contributed to the Texan culture and lore. We love the Dia de los Muertos (Day of the Dead) in Texas just as much as Halloween. Maybe it’s the vastness of the state, but it makes such a great backdrop to any horror tale.

HL:  What object, do you think, is most effective to dismember a zombie?

Rhiannon Frater is the award-winning author of over a dozen books, including the As the World Dies zombie trilogy (Tor), as well as independent works such as The Last Bastion of the Living (declared the #1 Zombie Release of 2012 by Explorations Fantasy Blog and the #1 Zombie Novel of the Decade by B&N Book Blog), and other horror novels. She was born and raised a Texan and presently lives in Austin, Texas with her husband and furry children (a.k.a pets).  She loves scary movies, sci-fi and horror shows, playing video games, cooking, dyeing her hair weird colors, and shopping for Betsey Johnson purses and shoes.

You can find her online at:

The grand prize is an autographed hardcover of ‘The Mesmerized’.