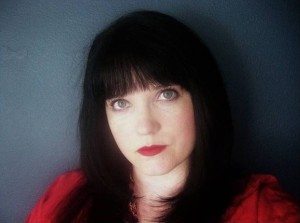 HELLNOTES: Describe you novel Nameless in one sentence?

MERCEDES M. YARDLEY: Snarky, antisocial outcast is forced to grudgingly battle the demonic in order to save one of the only people she cares about.

HL: How does the protagonist, Luna Masterson, differ from other urban fantasy heroines?

MMY: Luna differs in that she has no idea what’s she doing. She isn’t a demon hunter. She isn’t a demon slayer. She just wants to be left alone, and deals with situations as they pop up. Resentfully. She’s muddling her way through and has no prowess. I think that’s refreshing. I love reading about these battle-hardened urban fantasy heroines in their tight leather pants, duking it out with the supernatural. It’s fun, but it isn’t relatable. Poor Luna likes to think she’s tough and doesn’t need anybody, but she’s been abandoned by everybody who loved her. She bites her nails. She wears old band tees. And her refusal to learn about the rules of the demonic world come back to bite her. Sometimes literally.

HL: Nameless, like many of your other stories, mixes humor with horror. If you had to choose, would you rather make a reader laugh or shriek in terror?

MMY: Oh, they go so hand-in-hand that it’s difficult to decide. Sometimes we laugh to keep the terror at bay. The things we find funny? People falling down, slapstick, verbal banter? Have that same scene take place at night in the woods with sinister music, and the same thing will make your heart beat fast. Next time you’re watching a comedy, look for that. The fact that horror and humor are so interchangeable if you simply change the ambiance. In this show, the guy running around with his hair on fire is hysterical. But change the soundtrack and you’ll realize it’s horror.

But I’d rather laugh, I think. It’s how I get through life. My sense of humor is very sick, very gallows. If it wasn’t, I think I’d cry.

HL: Did you do any research for Nameless?

MMY: On the rules of the demonic? Certainly! You don’t want to tick off the Tiptoe Shadow and his cohorts by getting the facts wrong.

Being an urban fantasy based in an area I was familiar with, I didn’t need to do much research. I did a little bit about the concept of names being significant to demons, and that sort of thing. I asked my daughter to tell me more about the Tiptoe Shadow, which is what she called this thing that she said crept into her room at night and whispered to her.

I was taking a motorcycle class at the time and so I did some research on whether or not the motorcycle scenes were feasible. Like the evasion scene where Luna and Reed Taylor are basically trying to outrace the demons. My instructor acted the scenes out on the course for me with his bike, and it was really cool to see firsthand. I found out that the original move I wanted them to do would have snapped Luna’s leg off, so I changed that scene to something feasible that wouldn’t have her end up with a prosthetic.

HL: What were some of the influences for the book? Are you a fan of the Dead Files?

MMY: Oh, so many things influenced it! Ghost stories. I originally wrote it for my friend who sees me as somebody much tougher than I am, so I threw some of that swagger in there. My little girl was having nightmares every night about the Tiptoe Shadow, so he went in there.

I do like the Dead Files! Except it drives me crazy how she refers to them “dead people.” “I see dead people. Dead people talk to me.” It seems disrespectful to me, although of course she doesn’t mean it that way. I still want to be Mercedes after I die. I don’t want to be “a dead person.” I don’t think you lose your sense of self after death.

I love shows like that. I like being spooked, as long as it’s safe. I don’t enjoy watching possession shows, but I love ghost hunts and creepy little sounds and that sort of thing. Combining old spiritual ideas with technology and the like. It’s pretty cool.

HL: You learned how to ride a motorcycle while writing Nameless and had Luna riding one? What other parts of your life made it into the book?

MMY: The Tiptoe Shadow made it in. Different creepy experiences that my friends had shared with me. My combat boots and eyeliner made it in. Luna is very much an aspect of my personality. The snark and the nail biting. Black hair with blue tips. Little things like that snuck in. I think all authors write themselves and their loved ones into their characters.

Little things, too. What she was wearing, or snatches of conversation that I heard. If you talk to me right before a writing session, it’s nearly 98% certain that something we discussed will end up in there, if not quoted directly. If it’s raining. If it’s day or night. What type of mood I’m in. By not plotting beforehand, I’m allowed to do that. If I’m angry, I write an angry scene. If I’m happy, it’s happy. I think it brings realism to the story. Different emotions. Usually I smooth it out a little more than I did with Nameless, but Luna has these extreme ups and downs, these intense emotions. I wanted that to come through. It’s part of her personality, so I left it slightly more raw, more jumbled.

Also, every scene from the House of Horrors came from dreams that I had. The rumpled carpet, the bloody starfish. I keep a dream journal and I lifted all of that out. So welcome inside my head. I hope you enjoy your stay here.

HL: The Tiptoe Shadow was particularly creepy. Where did the idea for that demon come from?

My four-year-old was talking about a shadow that tiptoed into her room at night and told her “mean things.” She called him the Tiptoe Shadow. I thought that was a horrifying concept. She said his legs were too long and he hunched over when he tiptoed over, like people in cartoons. I built on that and Tiptoe was born. She was delighted that she helped Mommy’s book, and especially when I told her what eventually became of the Tiptoe Shadow. But I took the things that scare me, like the strange movements and speech, and incorporated it into the book. So basically, Tiptoe is what scares the Yardley girls.

He’s cruel. He’s conniving. He’s fixated, and more than anything, he wants to hurt. He’s demonic, after all. I expect a demon wouldn’t think like a human. I would imagine a demon would be infinitely worse than the worst human I know, and I’ve met some pretty disgusting people. I wanted him to chill the reader. I hope he does.

HL: What can you tell us about the next installments in the series?

I can tell you that book two will be bleak. I’m pushing Luna to her limits. I want to see if I can break her. I’m pretty sure that I know exactly how to do that.

The series is called The Bone Angel trilogy, and Bone Angels will come into play. We’ll learn where Demon Patrol and his cohorts went. They were missing at a pivotal scene in Nameless. We’ll discover why. What could be so important that Demon Patrol would step away when needed?

Book Two will be darker. Still funny, because that’s how Luna copes with life, but much darker than the first book. It’s always darkest before the dawn. If dawn comes, that is.

HL: What have you learned writing your first series? What were the challenges?

I’m not a plotter by nature. In fact, I’m exactly the opposite. I’m a discovery writer. I like to sit down and allow myself to be surprised by characters and situations that show up. So writing something that took place over three books was a challenge for me. It was necessary to make sure things tied up, that Book One didn’t feel unsatisfying even though it was only the first in the trilogy. If the reader takes the time to read the book, I want there to be a reward at the end of it. I hate waiting another two years for the series to finish up. There needs to be a treat along the way.

I learned that I can sustain a story through three books. That it’s possible and enjoyable to write something that is simply fun without overthinking it. With a series, you can delve so deeply into your characters! I love that. There’s so much room to play.