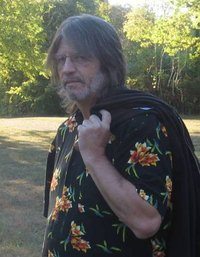 This interview was conducted by Hellnotes contributor Rick Hipson.

Hell Notes:  Wow. What a book! How tough was it for you to write through some of the more brutal parts compared to the impact of reading it back afterward?

John Paul Allen:   Writing the bad stuff is always difficult and was more so with GT. This was my first story and I didn’t read horror so I wasn’t sure what was acceptable. While writing the book I’d type only a few lines and have to go out to the patio to sit with my wife. It took several drafts to get things as they eventually turned out. Matter of fact when Pam read the first draft of GT she gave it back to me with red Sharpie comments over most of the frightening parts. The one I remember most was: Not frightening enough. Do over. I did … several times.

HL:   How long was this story in your head before you went ahead and started writing it out?

JPA:  The original idea was a poem I wrote in the mid 80s for a class at Central Michigan University. I got an A and forgot about it for about 25 years when I needed to write a story for another class. That became a five-page short story with one nameless character discussing how he picked up kids at elementary schools. I got a lot of praise for it and decided to email it to several writers (thinking since they didn’t work they had time to read it). One did. I’ll leave him a mystery, but he suggested I expand the story. I told him I wasn’t interested. I only wanted comments about my writing and didn’t want to write horror. He told me to rethink my decission. A week later I was at a stop light when the basic idea of GT hit me. I arrived home ten minutes later and told my wife I had an idea for a book and she told me to sit down and write it. Note that I don’t usually think out stories before writing them and I don’t write from beginning to end. Copy/Paste is my friend. I made up GT as I wrote it and didn’t know the ending until I wrote it.

HL:  I understand you took on a lot of heated letters from readers who were incensed over this book who simply didn’t have anything nice to say about it.  How do you keep yourself balanced by the haters and what do you have, if anything, to say to them?

JPA: Yeah – some took it personal. I lost my job, neighbors didn’t talk to me, and a couple of people emailed that they wanted to kill me (and my family). The one that bothered me most was a neighbor I talked with on a daily basis. She kept asking for a copy of the book and I refused – explaining the reaction I received from others. The pleas continued until I gave her a book. Three days later she pulled into her yard, looked over the fence and ran inside her house. She didn’t speak to me again until 3 years later, the day after my wife passed away. She brought over food, which for some reason I never ate. So how do I feel about/handle haters? They make me laugh and I ignore them when one is spotted.

HL:  There’s some pretty deep down heady stuff going on amidst all the violence and unfolding dark twists. You often explore the concept of life after death and reincarnation.   How much of this is based on your belief system vs the musings of your imagination?

JPA:   My belief box has changed lanes throughout the years. I was raised Catholic … got “saved” in a Pentacostal Church … got “unsaved” on the campus of Florida State University … attended a Methodist church with wife #2 and wife #3 (married to her while writing Gifted Trust) was an Eckist (long story – believed in reincarnation and many levels of existence). What did I get from all this? We choose to believe what makes us feel good. My theory is: We go somewhere. If I had it my way, I’d either come back and fix things or at least haunt those who irritate me in this life.

HL:  In the same vein as the film FALLEN staring Denzel Washington, a tale like this where evil jumps hosts as easily as you and I refill our coffee cups, it is a story that could easily go on forever. Any sequels in your future?

JPA:  A sequel was written, but never got published. Why? Easy answer – publisher didn’t like it – thought it would confuse the reader … and that might be true. Will I make changes and try it again? Probably, since I know how things turn out I should some day tell everyone else.

HL:  And finally, if you could choose to be reincarnated as any popular – and dead – individual in order to literally get inside their heads to see what made them tick the way they did, who would it be and why?

JPA:  Popular and Dead – if it was just dead that would be easy. I’d want to know what the hell went on in my father’s head. Prior to the Second World War he was “discovered” by Henry Ford, given a education and eventually a position as a junior exec with the Ford Motor Company. I grew up hearing stories of those days and viewing lots of pics with him next to all the Fords (Henry Sr, Edsel, the others) and Thomas Edison (also a friend of the family). Then Pearl Harbor happened and he joined the navy … sort of had a falling out because of this decision. When the war ended he went with the Lipton (Tea) company. It was during that time I came into the picture. Early in my life he made a “Green Acres” move – quit corporate life and bought a small grocery store in the middle of no where in Michigan. It didn’t work and he eventually had to sell. He then got a job driving for Frito Lay … worked with them until he retired. He passed away on Halloween 1998 and was always a mystery to me (as I probably was to him). I’d like to know what he was thinking during all these major moments of his life. Also I’d like to know if we were alike in any way. Now for the Popular and Dead choice – E.A. Poe. The guy had a lot of demons, but he was a genius.

HL  Anything on particular you hope folks take away from Gifted Trust other than a few restless nights?

JPA:  I’ve always wondered how well I actually did with the “message” of Gifted Trust. I’m usually the only one who mentions it, but there is a point and it’s not the violence. That’s window dressing. The whole thing is centered on the belief that life is divided up into lessons and how we deal with these will determine our growth as humans. In GT everything is centered on aspects of abuse – those who do it, the victims and those who know

about it and do nothing. I use the reincarnation factor for those who need another life to correct things.

By the way, thought I’d tell you about my new project. My first novel in a decade. When I started writing the plan was to only put out novels, and kept getting requests for shorter works. I admire those who can do multiple projects – something I find difficult. Well I put my foot down – one story for an anthology sometime next year and the rest of my writing is dedicated to Identity (working title). The idea came from Facebook. I received a notification that a friend that they tagged me in a photo. I clicked on the pic to find a high school band from Mississippi in 1976. When I put the cursor over different band members it would give me a name – one being John Paul Allen (not me). It appears that this person believes I’m someone he knew about 40 years ago in school. The idea: What if the above happened to someone – mistaken friend request via a social media site. The recipient knows it’s a mistake, but plays along with it … doesn’t tell the person who sent it … and while they communicate learns of bad things his namesake (who has disappeared) and his friend did years before. Oh – the namesake, who disappeared forty years earlier will come out hiding and more bad things will happen. From that I will write a book. Now I’ve got to entertain a two-year-old.