Hellnotes recently caught up with Owen King to discuss the process and the pressure that went into his stunning debut novel, Double Feature (Gauntlet Press 2013) (reviewed here for Hellnotes).

Hellnotes:  Although Double Feature is your first novel, its success should come as no surprise considering your already embedded history as a busy story teller (i.e. We’re All in This Together was named to the PopMatters list of the Best Books of 2005, among other awards for short fiction).  Still, this is a mammoth effort for any debut novel.  When was the seed for it first planted? 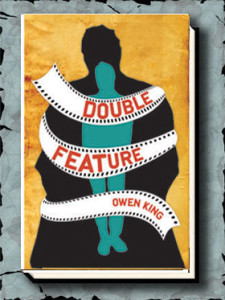 Owen King:  First of all, thanks for taking an interest in the book.

I’ve given different answers to this question in various places because I suspect there were multiple seeds. That’s the case with most novels, I suppose. To carry the garden metaphor a little further, a longer work of fiction is probably like a grafted fruit tree – part from here, part from there, part from I-don’t-know-where.

Anyway, with that caveat, I was certainly inspired by This is Orson Welles, the book of interviews of Welles conducted by the director Peter Bogdanovich. It got me thinking about film directing and about what awful things can happen when an artist loses control of their art. (Most famously, the final cut of The Magnificent Ambersons was taken from Welles and badly damaged by the studio.) Sam Dolan’s story in Double Feature hinges on radically different circumstances, his hubris is entirely his own, and his lost film is the absolute opposite of “Wellesian” – but the earliest inkling of the novel may have appeared when I read This is Orson Welles.

HL:  Did you have a road map going in, or was it a matter of diving pen first with no definitive destination?

OK:  I knew where it was going to end, or at least where I wanted it to end, and I had some scenes and turns in between, but there was plenty of improvisation. Certain characters were interesting in ways I didn’t expect and I ended up crossing them through the narrative more than once. Hopefully those reappearances feel organic.

HL:  Each character in Double Feature is so well-layered and fully, realistically drawn out that each becomes enduring in their own unique way.  Which character(s) did you find yourself most attached or enamored with?

OK:  Thanks for saying that!

You know, I’m pretty fond of all the Dolans. Of course, my impressions of them are tied up with what it was like to write about them. For instance, Booth’s dialogue is so verbose, he was sometimes kind of exhausting to write, but I enjoyed him.

HL:  I would find it difficult to believe such an epic story can be written so honestly and tragically without the benefit of actual experience to provide its backbone.  How much of yourself did Double Feature absorb?

OK:  Sam’s self-seriousness as a young twenty-something is probably the most autobiographical element. I was never as intense as him, but I had a few very strict ideas about stories and storytelling – about art, in general – that have loosened quite a lot over the years. At the same time, my very strict ideas and Sam’s very strict ideas are not identical. We agree about particular films – Dog Day Afternoon, say – and disagree about others.

HL:  I love the addition of special features and deleted scenes that conclude the novel.  How did that idea evolve and how they play into your writing schedule?

OK:  I worked on the entries from the film encyclopedia all the way along, primarily so that I’d have something to refer to without always having to pick my way through the manuscript. They’re fun, but also inessential. The novel proper tells you as much as you need to know about the made-up movies to follow the narrative. So the encyclopedia entries and those other odds and ends are perfect for an extra section, a sort of literary version of the second disc of a “Special Edition” DVD. None of the stuff on those second discs is (or should be) necessary to the experience of the film; you don’t need the extra scenes or the commentaries or the interviews, but if you have the inclination to dig into them they can add something.

HL:  When I think about the substantially deep-running gene pool that is the literary substance of your parents, brother and your own wife, I imagine the proverbial bar to be automatically raised to great proportions as far as readers’ expectations of your work goes.  Did you find there to be any added pressure to deliver the goods and carry on your family’s obvious legacy of outstanding writing while you were completing Double Feature?

Was there ever any doubt you’d follow in your family’s footsteps and set your compass on a writing career of your own?

OK:  Well, I’ve talked about this a lot, so my apologies to anyone who has heard this spiel before!

I felt a great deal of pressure when my first book came out, because I was concerned that Stephen King fans would buy it expecting horror stories and read it and say, “What a rip off!” I didn’t want to disappoint anyone or cheat anyone, especially not the people who have been, and continue to be, so enthusiastic about my father’s work.

I believe that at this point I’ve done everything in my power to be up front about that, to warn that my fiction tends to have a comedic bent, and that it doesn’t generally include too many supernatural elements. (Although it should be said, it’s not as though my father hasn’t written some hilarious stuff. The pie-eating contest in “The Body” immediately comes to mind.) Again, I’ve tried to make that clear not because I don’t want Stephen King readers to pick up my work – I do, of course – but because I don’t want anyone to feel like I gave them a false bill of goods. And I’m delighted and appreciative that so many of my father’s fans have given Double Feature a shot even though it is different.

HL:  Are there any plans or hopes to collaborate on a project the way your dad and brother Joe did with their tribute story to Richard Matheson, Full Throttle?

HL:  What can you tell us about what may be brewing on the horizon or already being worked on that we can look forward to enjoying from you?

OK:  I’m collaborating on a project with my friends Mark Jude Poirier (screenwriter of Hateship Loveship and author of the novel Goats) and the artist Nancy Ahn. It’s scheduled for an autumn 2015 release from Scribner. There should be more information about that (such as the title!) coming soon.

I also have a short story – a horror story, my first ever attempt at the genre – called “The Curator” that’s appearing in the next issue of Lady Churchill’s Rosebud Wristlet and after that in the anthology Detours.

HL:  Thank you very much, Owen, for all your time and, of course, for your excellent writing. Other than telling everyone to do themselves a favour a grab a copy of Double Feature, is there anything else you would like to add before we leave you to your craft?

OK:  It was a pleasure. Thank you. 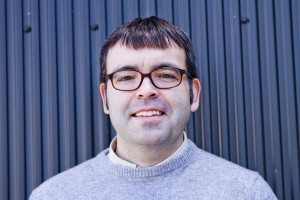 Owen King is the author of We’re All in This Together: a Novella and Stories, the novel Double Feature, and co-editor (with John McNally) of the anthology Who Can Save Us Now? Brand-New Superheroes and Their Amazing Short Stories. His writing has appeared in Grantland, the Los Angeles Review of Books, the New York Times Book Review, One Story, Prairie Schooner and other publications. Forthcoming in 2015 is a something entirely different, a graphic novel co-written with friend Mark Poirier and illustrated by his friend Nancy Ahn. Owen is married to the novelist Kelly Braffet.

To learn about Owen King, check out his website: http://www.owen-king.com/