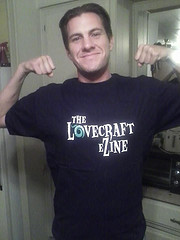 SAN FRANCISCO, March 3, 2013 – JournalStone Publishing (JSP) President, Christopher C. Payne is pleased to announce that up-and-coming author and editor, Aaron French, has been named the new Reviews Editor & Coordinator for both the Hellnotes Website and for Dark Discoveries Magazine, effective immediately. In naming French to the position Payne stated: “Aaron has displayed exemplary skill and dedication as Assistant Editor for Dark Discoveries, and will bring these same skills, dedication and energy to this new position as well.”

About Aaron: Aaron French has edited three small press anthologies including Monk Punk, The Shadow of the Unknown, and his soon to be released Songs of the Satyrs featuring brand new stories from David Farland, John Langan, and Mark Valentine. In addition to the editing and review-coordinating work he has done for Dark Discoveries, he also assisted as co-editor for the Lovecraft eZine for several issues. French will be in charge of weeding through the hundreds of review queries Hellnotes receives and hooking up authors, editors, and publishers with prospective reviewers. He will also select what materials will be considered, and at the end of each quarter he will pick which Hellnotes reviews will be reprinted in Dark Discoveries. French says he is excited to get started and looking forward to bringing the very best to the fans and readers of Hellnotes and Dark Discoveries. Anyone interested in submitting their material for review can email him at [email protected]

JournalStone Publishing is a small press publishing company, focusing in the Science Fiction/Fantasy/Horror genres in both the adult and young adult markets. JSP also owns and operates the Hellnotes website, offering daily news and reviews of interest to genre readers and fans, and Dark Discoveries Magazine, a slick, full color, distinguished and internationally distributed quarterly magazine.  We publish in multiple book formats and market our authors on a global level. We are also active with major writer’s groups, including the Horror Writers Association (HWA), and produce a monthly newsletter with exposure to thousands of people.