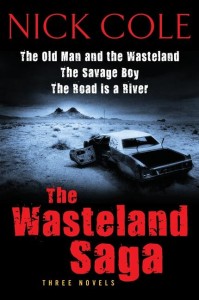 In these three novels Nick Cole, in a style that’s part Hemingway, part Cormac McCarthy’s The Road, sends us on a suspenseful odyssey into the dark heart of the Post-Apocalyptic America.

The Old Man and the Wasteland:

Forty years after the destruction of civilization… Man is reduced to salvaging the ruins of a broken world. One man’s most prized possession is Hemingway’s Classic ‘The Old Man and the Sea.’ With the words of the novel echoing across the wasteland, a survivor of the nuclear holocaust journeys into the unknown to break a curse. What follows is an incredible tale of survival and endurance. One man must survive the desert wilderness and mankind gone savage to discover the truth of Hemingway’s classic tale of man versus nature.

Amid the Wasteland remains of a world destroyed by a devastating thermonuclear armageddon, barbaric tribes rule the New American Dark Age. A boy and his horse must complete the final mission of the last American soldier. What unfolds is an coming-of-age epic journey across a terrifying America gone savage.

The Road is a River:

An Old Man and his Granddaughter set out across a post-apocalyptic wasteland to free a group of survivors trapped beneath a mountain in the underground bunker at NORAD.

Together, along with a mysterious Boy they rescue in the desert, they face the terrors of a radioactive Las Vegas infested by an army of crazies, journey east into the heart of tribal darkness that is the Apache of the Wasteland and, as they near their final confrontation with the infamous King Charlie, meet a maniacal fool bent on the nonsense of utopia. Post-apocalypse meets Shakespeare’s King Lear in this final and epic conclusion of the tale.