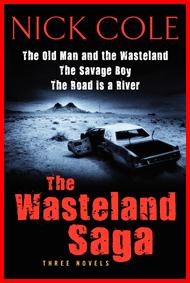 The Old Man and the Wasteland:

Years after a nuclear holocaust, a sense of normalcy has settled over the post-apocalyptic wasteland that was once Yuma, Arizona, and the survivors don’t need to fight for life quite so hard. But one Old Man has nothing but his survivor’s instincts. Nothing but those, his bad luck, and a battered, read and re-read copy of The Old Man and the Sea. A cross between Hemingway and Cormac McCarthy’s The Road, The Old Man and the Wasteland takes readers on an odyssey into the dark heart of the Post-Apocalyptic American southwest in an incredible tale of survival and endurance. One man must survive the desert wilderness and mankind gone savage to discover the truth of Hemingway’s classic tale of man versus nature.

Armageddon has long since happened; a thermonuclear apocalypse has ravaged the landscape of America and turned it into a wilderness straight out of the Dark Ages of man. Barbaric tribes run rampant and dole out chaos and terror with no regard for the morals, safety, or sanity of others. In the midst of the hellish Wasteland, a young soldier boy is tasked with a final mission from his dying commanding officer:  go to California and join up with members of a fractured army. With nothing but his horse and lessons from a dying man,The Savage Boy undertakes an epic journey across the Wasteland—from which he may never emerge.

The Road Is A River:

The Old Man returns…only to set out on his most dangerous journey yet. With his granddaughter in tow, he sets out across a post-apocalyptic wasteland to free a group of survivors trapped beneath a mountain in the underground bunker at NORAD. They trek across the desert, riddled with the terrors of insane vagrants, infected with radiation poisoning, and head into the dangerous tribal territory of the Apaches, rescuing a mysterious Boy in the desert along the way. This is King Lear as viewed through a gritty, post-apocalyptic lens, and the madness becomes tangible as our heroes confront the infamous and unsettling King Charlie—a maniacal fool bent on the nonsense of utopia.

Nick Cole is a working actor living in Southern California. When he is not auditioning for commercials, going out for sitcoms or being shot, kicked, stabbed or beaten by the students of various film schools for their projects, he can often be found as a guard for King Phillip the Second of Spain in the Opera Don Carlo at Los Angeles Opera or some similar role. Nick Cole has been writing for most of his life and acting in Hollywood after serving in the U.S. Army. Visit him here at his website: http://nickcolebooks.com/, and follow him on twitter @NickColeBooks.