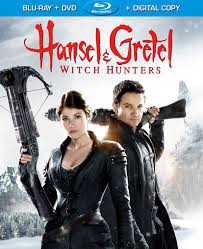 In this world of remakes, re-imaginings, and re-whatevers, it is no surprise that many fairytales are getting “hip and fresh” updates. After all, the only reason some (most) remakes exist at all is to cash in on name recognition, and everyone knows fairytales. Best of all, they’re public domain, so the bean counters at the big studios have got to be drooling over the idea of getting that much name recognition for free. And cashing in on a name is the sole reason for 2008’s horribly inept Prom Night remake (and insert any number of 80s slasher remakes here), because god knows it had nothing to do with the original flick. This is also one of the reasons there were three Sleeping Beauty movies last year. So now it’s Hansel and Gretel’s turn. Does this update do something new, or at least entertaining, with the story that everyone already knows? Or is it like most modern fairytale retellings: lame, sappy, corny, and utterly forgettable?

The movie starts off as everyone knows: two kids alone in the woods come across a candy house, a wicked (and truly wicked looking) witch who wants to eat them, and then the brother and sister turn the tables and it’s the witch who ends up in the oven. From there the film jumps ahead a number of years and Hansel and Gretel are now grown up and a pair of famous witch hunters. They’re called in by a small town suffering from a rash of child abductions by a trio of witches and their pet troll, and what starts off as another simple witch hunt turns out to be much more. The head witch in charge is the lovely (well, not so much in this movie) Famke Janssen, and not only does she have a devilishly evil plot that threatens the entire world, but she has secrets to H & G’s mysterious past. Will the siblings rise up to meet the challenge or will the witches rule the world? Oh come on, you know how it’s going to end, good will triumph over evil and all that, but is this black magic ride worth taking?

Surprisingly, yes. I went into this movie with very low expectations, so maybe that helped, but I did get more than a few giggles from this comedic, dark fairytale. The acting across the board was very good, from Jeremy “Mr. Hawkeye” Renner to Gemma Arterton (who has been in a bunch of movies lately, and if you check out her IMDb page you will see at least a half dozen films now in pre-production) to Famke Janssen, and even all the supporting characters played by Peter Stormare, Rainer Bock, and the body, if not face, of Derek Mears as Edward the Troll. If that name sounds familiar to horrorheads, that’s because Derek was the latest Jason in the Friday the 13th remake.

The direction is well done by Tommy Wirkola, a young filmmaker who first made his mark with the cool Nazi zombie flick, Dead Snow, from Norway. The cinematography, sets, and costumes were all top notch and special kudos must go out to special effects guys who made a multitude of creepy witches for the movie’s climax. Drawing inspiration from real witch legends from many cultures across the globe, it was neat to see all those baddies realized “in the flesh” as it were.

The new Blu-ray/DVD combo release from Paramount garishly proclaims that it is the unrated cut. There’s even a little blood-splat sticker that says “with intense new footage not seen in theaters.” Now I never saw this movie in theaters, so I don’t know what has been added to this release. But I can say that there are some good, gooey, splatter bits in there for the gorehounds. No, it doesn’t reach Evil Dead levels of blood and gore, but I was surprised at some of the saucy parts in this flick. In addition to the added red stuff, there is a behind the scenes featurette called “Reinventing Hansel & Gretel” and another on all the witches called “The Witching Hour.” There’s even a short special effects bit on the troll, Edward.  And…well that’s it. Yeah, this Blu-ray isn’t exactly overloaded with goodies, but neither is it barebones.

Hansel & Gretel: Witch Hunters was an unexpectedly enjoyable movie. It was far more funny than scary and it pulled off that humor well. It seemed to fully know what kind of film it was and embraced it rather than try to reinvent the wheel or pander to one specific demographic. Yes I’m looking at you, 2011’s Red Riding Hood. The special effects were good, so there’s lots of eye candy in here, and I’m not just talking about the beautiful Gemma Arterton, or the rugged Jeremy Renner for the ladies. I really got a kick out of all the witches at the end and it was neat to see the troll realized as a physical thing about as much, if not more so, than just a purely CGI creation. Is this one of my favorite movies of the year? No, but I did enjoy my time with it, which is a lot more than what I can say for many flicks. So consider this one recommended. Yes, I’m about as surprised at that as you are.