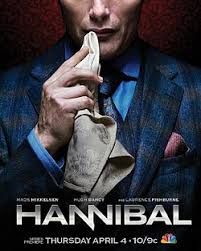 Horror themed television series have been around for decades but, in my opinion, only a handful of them are any good. My favorite horror series of all time is the great Masters of Horror from Showtime. For three seasons the show allowed some of the finest horror and thriller directors to show their stuff. Not every episode was perfect but so it goes with week after week television. From the same network, Dexter is a great show that perfectly balances horror and thriller elements with macabre humor. In the eighties we had the creepy Tales from the Dark Side series and, going back some years, The Night Stalker and Alfred Hitchcock Presents were good horror/thriller series.

Now we have a show that is a prequel to one of the most beloved horror characters in cinema history. NBC’s Hannibal tells the origin story of how Dr. Hannibal “The Cannibal” Lecter first met with F.B.I. agent Will Graham and how their relationship as colleagues solving cases together turned into something darker, leading to the conclusion we are all familiar with.

I have always spoken of how Michael Mann’s Manhunter, Jonathan Demme’s Silence of the Lambs, Ridley Scott’s Hannibal, and Brett Ratner’s Red Dragon are not so much horror films as they are thrillers with horror elements. The horror elements are very strong but the thriller aspects ring loudest. However, the World entire has embraced the Hannibal Lecter films as horror so, although I disagree, I must concede and address them as such.

The new Hannibal series was created by Bryan Fuller, who created the macabre ABC series Pushing Daisies. He has stated that he wanted to bring gruesomeness back to the aura of Hannibal Lecter that pop culture has taken away. I like this way of thinking.

Directed by David Slade, who did the incredibly disturbing indie thriller Hard Candy and the ultra-tense horror film 30 Days of Night, the first episode in the series is near brilliant.

British actor Hugh Dancy has taken over the role of Will Graham that was played to brilliant perfection by William L. Petersen in Mann’s Manhunter and played with bland indifference by Edward Norton in Ratner’s remake, Red Dragon. Dancy is as good as Petersen from the 1986 original. Dancy plays him as a truly damaged man who has seen too much and is too good at getting far inside the heads of the killers he is hunting. The performance and look are exactly as Thomas Harris described him in the novel. One episode in and I am already screaming for Emmy and Golden Globe nominations for his excellent performance.

From the first moments, we see Graham get inside the thinking pattern of a killer as he is standing at a fresh crime scene. In this incarnation of Will Graham, we see him talk it out as he places himself in the middle of the murders, committing the crimes as the killer. It is terrific stuff!

As with all series premiers, we are introduced to most of the main cast. Laurence Fishburne plays Jack Crawford, Graham’s boss at the bureau. Crawford was played by Dennis Farina in Manhunter , Scott Glenn in Silence of the Lambs, and Harvey Keitel in Red Dragon. Farina should have scored an Oscar nod for his on the money performance. I feel the same about Scott Glenn’s great portrayal while Keitel did a serviceable job in his turn at the role. Fishburne does very well making the role his own. His Crawford is all about business and letting Graham get “too close” if that is what it takes to catch a killer. The actor hasn’t had a role this juicy in years, nor has he been this convincing.

Other side roles have been cast with smaller character actors and some have had gender reversals, which is fine. It actually adds an interesting dimension to the role of Dr. Bloom, played by Caroline Dhavernas.  The current incarnation of Dr. Bloom, previously written as a man and good friend of Graham,  has had a romantic relationship with him in the past. Now she watches over him as his therapist and former lover.

This leads to the true star of the show, Hannibal Lecter. He is played to perfection by Danish actor Mads Mikkelsen who brilliantly played the villain in the great James Bond reboot Casino Royale. He brings a sinister quiet to his performance. He looks intensely into the eyes of Graham, knowing he is a formidable opponent that he will, perhaps someday, have to deal with. He brings Graham a home cooked breakfast one morning before they begin their investigation. Graham, not wanting to have a Psychologist as a partner trying to help him fit mentally as well as physically, tells Lecter, “I don’t find you that interesting.” Lecter replies while taking a bite of his breakfast and wearing the faintest hint of a smile, “You will.” It is a brilliant exchange and is played to perfection.

Director Slade treats us to many gruesome images of victims impaled on deer antlers, bloody crime scenes, and true horror atmosphere. For me, the best shots were the close ups of Hannibal Lecter’s frying pans as he cooked his “meat” preparing for his dinner. Mikkelson is chilling as he sits, almost emotionless, then slices into his dinner and takes his first bite. A smile forms in the corner of his mouth and a look of pure satisfaction flows over his face. We know what he is eating and it makes for a terrifying moment.

As with all television series, I am nervous that they can keep up this pace for a whole season. If they can, I feel we have a good two or three season show ahead of us. The show, no matter how good, mustn’t go on for too many years. After all, we know where the relationship between Graham and Lecter is heading.

For fans of the Hannibal Lecter films and novels and fans of good horror themed thrillers, Hannibal is a treat.