Hands of the Ripper – Blu-ray Review 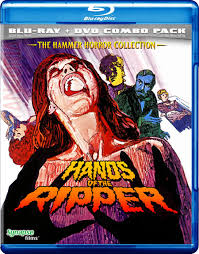 Hands of the Ripper – Bu-ray review

If you’re any sort of horrorhead then you have heard about the legendary Hammer Films. But if all you know about them are their Dracula and Frankenstein films starring Christopher Lee and Peter Cushing, then you’re missing out of dozens and dozens of fine fright films that have largely been forgotten today, and that’s a shame. Thankfully there are companies like the always excellent Synapse Films that not only remember the classics, but puts them out as great looking Blu-rays. One such movie is 1971’s Hands of the Ripper. Now with a title like that I’m sure you have some idea of what this movie might be about, but if you think it’s just another retelling of Saucy Jack’s shenanigans, then you’re in for a treat.

Hands begins in 1888 with Jack on the run from a mob. He makes it home, but being spotted by his wife all blood-splattered and oddly moldy (yeah that part is never explained), he quickly dispatches her right in front of their young daughter’s eyes. Jumping ahead fifteen years and the Ripper’s daughter, Anna, is a young woman who was adopted by an old fake spiritualist who not only cons the grief-stricken through phony séances, but pimps out poor Anna as well. Then one night Anna sees a shiny gemstone and before you can say psycho switcheroo, she goes into a trance, picks up a fireplace poker, and rams it through her adoptive mother. Don’t worry, that’s not a spoiler or anything, as the murder is fully shown to the audience. No the mystery here is why young Anna hacks people up every time she sees something sparkly, as adoptive mommy (un)dearest is just the first to meet her end at the hands of this new ripper.

The core of the story is the relationship between deadly Anna and an older man and psychoanalyst, Dr. John Pritchard. The good doctor knows Anna is a murderer.  He even goes so far as to cover up some of her crimes, and yet he still invites her into his home with his grown son and his blind fiancée, all for the chance to study the mind of a murderer. Hmmm, whatever could go wrong with that? Well to say too much more would be venturing into the dreaded sea of spoilers, but I will say that this movie is a fine example of Hammer Films doing what Hammer did best. It’s a period piece with some shocking violence (at least for the time) and even some naughty nudity, which was also a bit shocking for the time. It has richly fleshed out characters, a bit of British melodrama mixed with mystery, and even some good old fashioned creepy bits.

If you’re a fan of the flicks that Hammer made and this one somehow slipped past you, then you’re going to love this movie. If you’ve never seen any films from the house of Hammer, then where have you been? Regardless, Hands of the Ripper is a great example of Hammer Films at the top of their game, and so for the uninitiated looking to explore those gothic, wonderfully filmed horror movies for the first time, this movie would be a good place to start.

This fine film is presented in style with a Blu-ray/DVD combo pack from Synapse Films. First and foremost, the movie looks great in HD, but that’s par for the course for anything from Synapse, as are the nice selection of extras found on this disc. There is a featurette called “The Devil’s Plaything” that runs 28 minutes. There is an automatic slideshow called “Slaughter of the Innocence” that runs 6 minutes and shows the evolution of the gory makeup effects used in many of Hammer’s movies. There is a 7 minute audio introduction that was used by ABC when Hands of the Ripper was aired on US television in 1977 to replace all the bloody and sexy bits that were edited out. A still gallery, U.S. theatrical trailer, and T.V. spots bring the extras to a close.

Hands of the Ripper is easy for this old Hammer fan to recommend to any other Hammer fan out there. However if all this talk of Hammer just has scratching your head or humming “U Can’t Touch This” then hurry up and get some horror history education today by picking up a copy of this Blu-ray/DVD combo.